Sugarland singer Jennifer Nettles welcomed a new bundle of joy to the world as she gave birth to her first son, Magnus Hamilton. 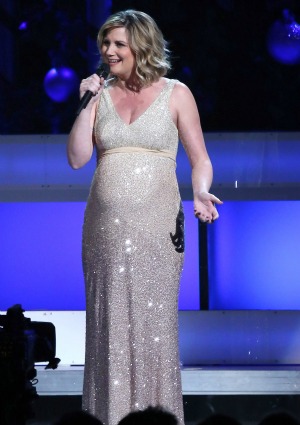 It looks like one person won’t be at Monday’s American Country Awards in Las Vegas, but her absence is for a very good reason. Sugarland singer Jennifer Nettles gave birth to her first child on Thursday.

The country singer and her husband, Justin Miller, welcomed a son, Magnus Hamilton Miller, to the world. The couple released a statement about their new bundle of joy: “We are so thankful for all the prayers and support and are excited to take some time together as a new family.”

The duo just celebrated their first anniversary on Nov. 28. They were married last year in a sunset ceremony in Tennessee, so it’s been a big year for their growing family.

The Grammy-winning singer also had a busy summer working on the ABC show Duets, and toured with her band. Luckily, the 38-year-old had a pretty easy pregnancy.

In her third trimester, she told People, “I’m happy to just have the opportunity to be at home. I’m throwing things away, organizing [and] putting up suitcases. But I’m feeling great!”

Nettles does plan on touring with Sugarland, and her new baby boy will be in tow. The group has been together since 2003, with 2004 being their big breakout year.

In 2011, the group made headlines after a storm collapsed the stage shortly before they performed at the Indiana State Fair. Sadly, the catastrophe injured 58 people and killed seven concertgoers.

2012 was a much better year for the group. Sugarland recorded the song, “Guide You Home” for the movie Act of Valor and they toured through the spring and summer. They finished up about two months before Nettles gave birth.