The Hobbit is taking the world by storm. It’s an all-new adventure with a familiar character played by a different actor. Martin Freeman replaces Ian Holm as the lovable Bilbo. 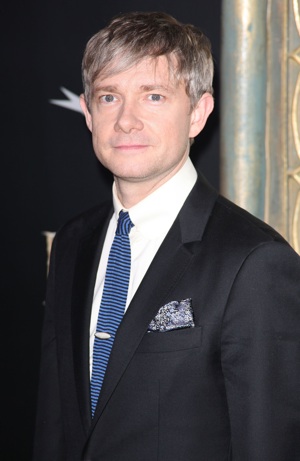 One of the year’s biggest films is The Hobbit: An Unexpected Journey. It’s the first of three based on the popular J.R.R. Tolkien book. Directed by Peter Jackson (The Lord of the Rings Trilogy), The Hobbit focuses on a younger, less experienced Bilbo Baggins.

The character’s played by British actor Martin Freeman. Although he’s steadily worked in his native country for years, The Hobbit is taking his career to a whole new level. According to The Hollywood Reporter, Freeman considers himself “geek royalty now.”

It’s official! Hobbit fans in for a third film >>

The actor’s well aware of the fandom surrounding the franchise. His character’s very popular, and the film’s exposing him to a new audience. Freeman really wants to keep his new title. “That’s the main responsibility,” he joked. “It’s not playing Bilbo, it’s my responsibility as a geek prince.”

The Hobbit releases a new trailer for An Unexpected Journey >>

Even though he’s at the center of Hobbitmania, he admits he didn’t grow up reading it.

“I came to it as an adult for this. It was nice coming to it that way around, actually. In a way, it decreased the pressure. I think if I had been carrying that around since I was 10, that would have been quite overwhelming by the time I grew up. My being here would be overwhelming. As it was, it was more exciting than scary.”

To be fair, The Hobbit isn’t Freeman’s first foray into the geek world. The actor currently plays Watson on the BBC series Sherlock opposite Benedict Cumberbatch. The drama has a huge geek following, and The Hobbit‘s just adding fuel to the fire.

The film opens in theaters Dec. 14.

Are you excited for The Hobbit: An Unexpected Journey?