Controversial feminist writer Camille Paglia pens a doozy of an essay for The Hollywood Reporter in which she takes singers Katy Perry and Taylor Swift to task for “ruining women.” 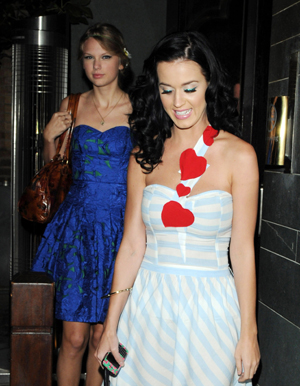 “Insipid, bleached-out” white girls like Katy Perry and Taylor Swift are killing feminism in America, says writer Camille Paglia in an essay for The Hollywood Reporter.

Paglia was apparently set off by Forbes‘ list of Hollywood’s highest-paid women, which was published in October.

Oprah out-earned everyone else, of course (though Forbes reporter Dorothy Pomerantz points out that with her syndicated show gone, her earning power is lessened). But Swift was in third place on the list, having earned $57 million with platinum singles like “We are Never Ever Getting Back Together” and “Safe & Sound.”

Perry showed up ninth on the list with $45 million in earnings, thanks to continued airplay of her 2010 album Teenage Dream.

Perhaps that’s why, Paglia writes, Perry is “still stuck in wide-eyed teen-queen mode” even though she’s 28 years old. “Especially after the wreck of her brief marriage to epicene roue Russell Brand, her dazzling smiles are starting to look as artificial as those of the aging, hard-bitten Joan Crawford.”

Swift was also in for harsh words from the writer. She “affects a ‘golly, gee whiz’ persona of cultivated blandness and self-deprecation, which is completely at odds with her shrewd glam dress sense.”

Dear Taylor Swift: Please get over your long-lost princess act >>

Paglia also wrote that Swift’s vocal style is “monotonous” with a “characterless keening soprano” in “meandering, snippy songs” about her boyfriends.

The problem isn’t with the singers themselves, says Paglia. It’s what they represent: bland, non-controversial girlishness, not strong and powerful sisters who are doin’ it for themselves.

Aging women have, Paglia writes, “become progressively invisible. If girls are helplessly stalled at the ingenue phase, it’s partly because women in their 40s and 50s are, via Botox, fillers and cosmetic surgery, still trying to look like they’re 20.” The entertainment industry should be giving American women models of “mature womanliness,” not “demure girly-girls.”

47 mins ago
by Summer Cartwright