Bret Easton Ellis, a writer whose heyday was the 1980s, inexplicably takes to Twitter to criticize director Kathryn Bigelow as “overrated” due to being “very hot.” 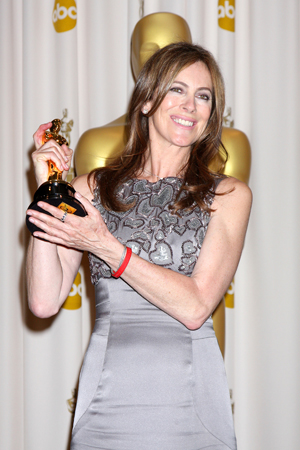 Aww, has little Bret Easton Ellis not been getting enough attention? The writer shot off a random Twitter salvo on Wednesday that said director Kathryn Bigelow is “overrated” due to her looks, The New York Daily News reported.

The whole tweet reads “Kathryn Bigelow would be considered a mildly interesting filmmaker if she was a man but since she’s a very hot woman she’s really overrated.”

Did Kathryn steal Bret’s Wooby or something? It’s unclear if Ellis is angrier at Bigelow for being female or being good looking: This is the fella, the older among us might recall, whose most famous novel, American Psycho, features a scene in which the titular psycho rigs up a gadget to trap a rat inside a woman’s vagina.

Guy just might have a few problems with women, I’m saying. Or, possibly, sexy women. Or even more to the point, like many men, the problem might be hot women who won’t pay attention to him.

Anyhoo, Bigelow hasn’t responded yet to the snub. Maybe she appreciates the publicity, since the next film from the Academy Award-winning director is the buzzed-about Zero Dark Thirty, out Dec. 19.

Twitter responses to Ellis’ tweet were pretty hilarious. @et tu Brote? wrote, “remember when Bret Easton Ellis wrote that good book? me neither.” @VogtRoberts wrote, “In the future, parents will tell their kids to go to bed before midnight or a scary man will yell at them. That man is @BretEastonEllis.”

Ellis responded to the mini-furor caused by his tweet by tweeting back “Concerned Empire woman offended by Bigelow tweet writes ‘I love you, babe. But stop tweeting wasted.’ When the hell else should I tweet?!?”

It’s interesting to note that Ellis also has an exceptionally flattering profile image. Taken in 1988, was it? Thought so.

By the way, your name? It’s the ultimate ’80s name, right up there with Chad, Dirk and Biff. Pretty rich coming from a writer with a name that sounds like a cafeteria lady from the 1940s, but there you are.