Lindsay Lohan’s much-publicized financial woes must be worse than everyone thought: The troubled star sent sister Ali Lohan to sell shoes and clothes at a used-clothing store. 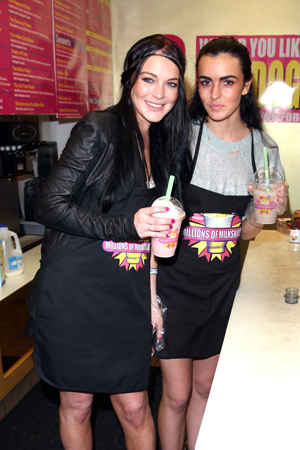 With her accounts frozen by the IRS due to nonpayment of taxes in 2009 and 2010, Lindsay Lohan is running out of cash and out of options. She’s apparently resorted to selling off her old clothes and shoes for extra money.

Radar Online reported Friday that Lindsay Lohan sent sister Ali (she of the terrifyingly shadowed visage) to Wasteland, a used clothing store in Los Angeles with a collection of designer clothing.

But despite the magnificence of Lindsay’s castoffs, Ali wasn’t able to realize much on the deal.

“Thirty dollars for these? They cost $700!” Radar Online quoted Ali Lohan as saying, according to “an eyewitness.”

Ali, do you need a lesson in basic economics? The shoes cost $700 new. After someone else’s dirty, sweaty feet have been in them, they’re worth $60 tops. The $30 you were offered gives the store room for a generous 100 percent markup, typical of used clothing.

Ali Lohan reportedly tried to negotiate the price on some items up, saying that Lindsay had worn such items as Chanel pumps and a Balenciaga purse on the red carpet.

“These have to be worth more, Lindsay was photographed wearing them, that has to add value,” she begged.

But the management didn’t budge, and Ali ultimately left the store not much richer than went she went in.

Anyone who’s ever brought old clothes, books or shoes in to sell can relate to Ali Lohan’s experience — you never get as much as you thought you would, and you leave bitterly contemplating the difference between what you paid for the items and what you received for them.

Meanwhile, Lindsay’s (admittedly kooky) dad Michael Lohan wonders where all his daughter’s money went. He told Radar that she made $150,000 endorsing an energy drink. Wouldn’t that help with the $233,000 she owes to the feds?

Sure would! So where’s that money?