Just in case you’re not quite sure what 1600 Penn is all about, we’re here to help. We’ve got the low down on some of the characters, as well as a few sneak peeks. 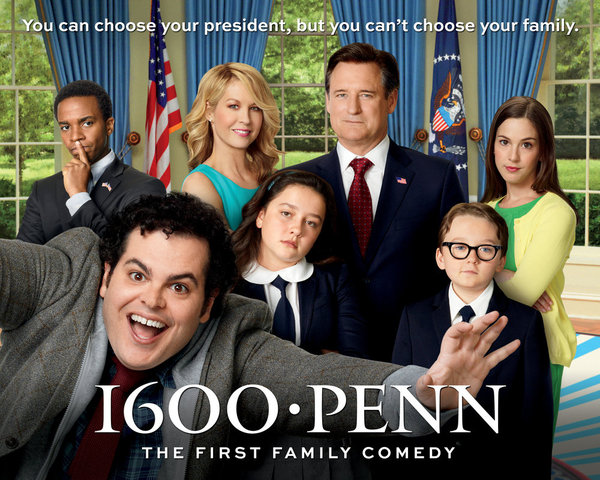 The first couple teasers for 1600 Penn were so over the top, they seemed to try too hard. While the situations involved in NBC’s new show are still sometimes a little farfetched, the humor has grown on us.

Take a look at the most recent promo:

Until now, the previews have all been very Skip-centric. The show was beginning to look more like a comedy about a hapless idiot who accidentally finds himself living in the White House than a comedy about a normal family that moves into the White House when the dad (Bill Pullman) is elected president. The new promo adds two new ingredients that tone down the absurdity and add to the humor.

First, we meet Becca Gilchrist, the oldest of the two Gilchrist girls and a seemingly normal and not entirely dysfunctional human being. She’s just your average young adult… who happens to end up pregnant.

More importantly, we see more of Marshall Malloy (Andre Holland). He appears to be some sort of White House aid, and it’s his ability to see the insanity and try to correct it that shines. When first lady Emily Gilchrist (Jenna Elfman) is told by a grade-schooler that her father referred to the first lady as a trophy wife, she looses her cool. It immediately feels unbelievable. Americans have had the privilege over the last few decades to be graced with eloquent, charming and levelheaded first ladies. Even when their husbands are making mistakes, our first ladies come off rather flawless. When Emily begins to launch into a cutting remark, it’s Marshall that dives in and cuts her off, and it’s Marshall that saves the scene from seeming too unbelievable.

Now we’ll introduce you to Skip (Josh Gad). He’s the oldest Gilchrist kid who, in a normal situation, would be off at college and out of the White House. Skip is far from normal, though. He’s loud, accident prone and oblivious. If the guys from The Hangover were to ever raise a child, it’d probably turn out a lot like Skip Gilchrist. Here’s what we mean…

So, Skip’s an idiot. But, he definitely means well. For whatever reason, there’s a bit of a disconnect between he and his family, and he continues to try to repair it. He does so most notably in the slightly touching (but quickly turned humorous) moment in the first promo we showed you, when he tried to cover for his sister.

It’s certainly funnier and less ridiculous than one of the first previews we were shown, that’s for sure.

All in all, we’re excited about 1600 Penn. If the show turns out more like newer clips suggest, it looks like a funny show that might actually stick around for a couple seasons.