Paula Deen has turned into a very determined do-gooder. The celebrity chef showed up Wednesday to help a whole lot of ham get delivered to Hurricane Sandy victims. An easier-said-than-done task, it turns out! 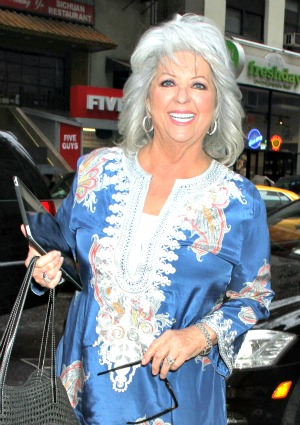 Paula Deen is a delivery girl on a mission! The celebrity chef spent Wednesday morning making sure 25,000 pounds of ham made its way into the hands of Hurricane Sandy victims before the holidays.

The 65-year-old, who went public with her diabetes battle in January, turned up on Staten Island to help out Smithfield and the UFCW’s Feeding the Hungry program. While hamming it up for the benefit of storm victims and cameras, Paula Deen took to tossing hams like she was throwing a Hail Mary pass to the end zone!

“We’ve been trying for a month to get here because you could see on TV what horrible, horrible shape all these people were in, especially Staten Island and Atlantic City,” Deen explained to ET, whose cameras were along for the delivery.

“I can’t come this far from Savannah and not want to see what the power of this storm did to this part of our country,” she added.

Referring to the volunteers as “angels,” Deen tried to look for the silver lining in the lengthy aftermath of Hurricane Sandy’s destruction.

She continued, “Tragedy is sometimes a wonderful reminder to us about our sisters and brothers that share this country with us — the generosity and love and compassion they have in them.”