Ellen Degeneres’ latest JC Penney ad means war! One Million Moms is through with threatening the retail chain they’ll boycott, and has now declared, “we will avoid them at all costs.” Watch the not-so infuriating commercial for yourself here. 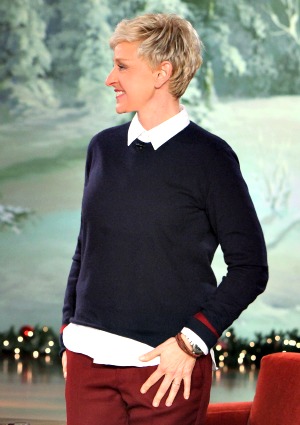 Ellen DeGeneres’ ad for JC Penney is chock-full of elves and sprinkled with height jokes. It’s not the little people who are up in arms over the ad, however, it’s One Million Moms yet again.

The same group who admonished JC Penney for hiring Ellen DeGeneres, who came out as a lesbian in 1997, as their spokesperson has now called for an all-out boycott. Love thy neighbor, but not thy gay-friendly neighborhood retail chain appears to be the gist of their missive.

After the airing of the Ellen DeGeneres ad below, One Million Moms (whose actual membership numbers are around 40,000), jumped into angry-letter-writing action.

Boston.com cites a letter from the group that reads:

“Since April, JC Penney’s has not aired Ellen DeGeneres in one of their commercials until now. A new JCP ad features Ellen and three elves. JCP has made their choice to offend a huge majority of their customers again. Christians must now vote with their wallets. We have contacted JC Penney’s several times in the past with our concerns, and they will not listen. They have decided to ignore our complaints so we will avoid them at all costs.”

Ellen DeGeneres’ ad isn’t the only thing that has OMM riled up, however. The group has previously protested Ben & Jerry’s Schweddy Balls ice cream, Urban Outfitters for girl-on-girl kissing in their catalog photos, Skittles for bestiality themes and NeNe Leakes’ television show.

Jumping in to show support for Ellen and JC Penny’s partnership is a Facebook group entitled “1 Million people who support Ellen for JC Penney.” While their numbers haven’t yet actually reached one million either, they’ve trumped OMM with over 325,000 members!

What do you think of Ellen DeGeneres’ ad for JC Penney?