Kathie Lee Gifford’s Scandalous: The Life and Trials of Aimee Semple McPherson is closing on Broadway less than a month after it opened. She spent 13 years writing the book and songs. Oy. 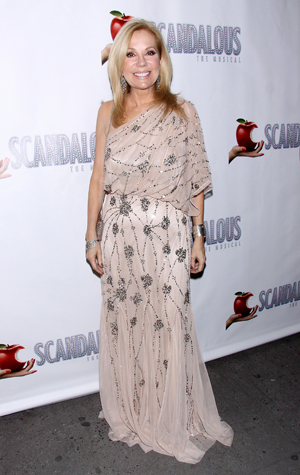 Bad day for Kathie Lee: Scandalous, Gifford’s musical about the life of evangelist Aimee Semple McPherson, is closing on Broadway less than a month after it opened.

Sunday’s performance of Scandalous will be its last.

News that the production is shuttering is not particularly surprising. The show has been savaged by critics, with the New York Times calling it “generic and dull” and “formulaic.” The critic particularly gnashed his teeth over a biblical pageant in the show’s second act, in which “collectors of camp” can watch “Adam and Eve chomp from a sequined apple” as the actress playing McPherson (Carolee Carmello) “vamps as an alluring Delilah as Sampson groans in beefcake bondage.”

The Times was also unkind to Gifford, calling her “a perky television host with a bit of the mean girl lurking behind the blinding smile.”

Steven Suskin of Variety giggled at some of Kathie Lee’s choice lines: Her “hair is unruly as her spirit is wild” says Semple’s mother onstage, holding her 6-week-old infant. The rhymes in Gifford’s songs, Suskin sniped, were strange and silly: “changing world/ever-rearranging world” and “pompous piety/religiosity.”

Kathie Lee is headed to Broadway >>

Newsday‘s critic also took Gifford to task for offering “nursery-rhyme lyrics such as ‘come with me on bended knee,’ ‘you can touch the sky, why can’t I?’ and ‘Hey little lassie, come show me your assie.'”

Nonetheless, anyone watching the TODAY Show when Gifford announced, with a trembling voice, that the show she’d spent some 13 years working on (and a year staging in Seattle) was coming to Broadway, feels a little bit for her today.

Aw, big hopes, big dreams! Smashed! If all this came from a celebrity you really liked, it might actually be sad.

The New York Daily News speculated that the show’s lack of popularity stemmed from its length (a painful 2.5 hours), while the New York Times notes that ticket sales were slow for the musical. In fact, two of its producers, Amway scions Dick and Betsy DeVos, agreed to cover the show’s financial losses for a few weeks, or it would have closed even sooner than Sunday.

The Times painted a woeful picture of the show’s Thanksgiving season draw. At some performances, the cast was “playing to only a couple hundred people in the 1,450-seat Neil Simon Theater.”