Smash boy-band One Direction has inked a couple of unusual licensing deals that extend the band’s “brand” into tooth care. Weird, but that’s nothing compared to the endorsements other celebrities have made. 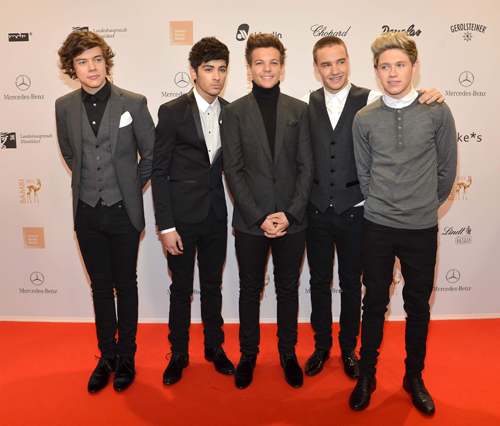 Does One Direction have what it takes to make kids brush longer? Colgate and singing toothbrush maker Brush Buddies are betting big on the Brit boy band, licensing the band’s name, songs and image for a variety of toothy products.

Harry, Niall, Zayn, Liam and Louis flash their pearly whites brightly on the packaging for Colgate’s One Direction power toothbrush (it has an oscillating head!) and manual toothbrush (you do all the work with your arms!), as well as the MaxFresh Toothpaste.

Any chance the toothpaste tastes like one of the fellas? No such luck. “Fresh mint” reads the packaging. Darn.

Meanwhile, in singing toothbrush news (who knew there was such a thing?), songs “What Makes You Beautiful” and “One Thing” will play on the Brush Buddies’ One Direction singing toothbrush, each playing for two minutes. Say, is that the same amount of time dentists recommend we spend brushing? Why, yes! Yes it is!

The idea is that brushers will use one song for morning brushing, one for night brushing. Say, what about our afternoon brushing? We’re supposed to do that silently?

Brush Buddies is something of a big fish in the small pond of singing toothbrushes: its Justin Bieber brush, introduced in 2011, racked up $4.62 million in sales in 52 weeks. The Lady Gaga model, which plays “Born This Way” and “Bad Romance,” hasn’t proved quite as popular.

Neither are weird celebrity endorsements new. Jamie Lee Curtis earned lots of money (and plenty of derision) by endorsing the supposedly colon-cleansing yogurt Activia, while Paris Hilton garnered giggles when she appeared in an ad for Burger King eating a big drippy cheeseburger.

Ozzy Osbourne was on commercials for I Can’t Believe It’s Not Butter and Best Buy. Lisa Rinna filmed a commercial for a Depends bladder-control product in which she implied she was wearing them on a red carpet.

With all this in mind, doesn’t sound all that strange to have One Direction singing in your mouth, does it?