Barbra Streisand is known for her amazing singing voice and long film career, but it’s been a while since she’s acted in a comedy. Find out what she told SheKnows about working with funny guy Seth Rogen, smoking pot and taking long drives with famous actors. 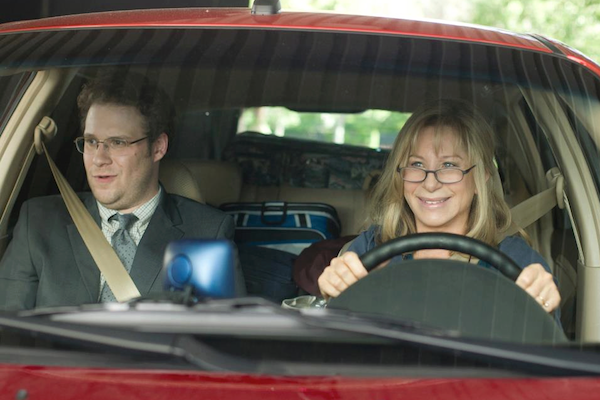 In the film, Streisand and Rogen play a mother and son who go on a road trip from New York to San Francisco — but Streisand isn’t quite like Rogen’s real mom.

“My mom is more like [the] Barbra Streisand character in Meet the Fockers,” said Rogen. “She’s more of a hippie. She’s a social worker who talks about sex too much. She’ll, like, post on her Facebook about pap smears.”

But Rogen does remember getting into a fight with his real mother.

“When I was 12, my mom spazzed and threw her keys at me, and I was like, whoa. We were in a car and I was close to her. Keys hurt, but words hurt more,” Rogen said as he laughed.

But Seth and Babs did enjoy hanging out together on set, which was never more than 45 minutes away from Streisand’s Malibu home.

“She tells really great stories!” said Rogen, then mentioned the one where Streisand went on a road trip with Marlon Brando.

“He [Brando] wanted to go the desert to see the wildflowers. Well, he wanted to stay overnight, but I told him I didn’t know him well enough,” said Streisand. “It was funny. It was a daytime trip and we went into a little hamburger joint with a creaky screen door and I was sitting there eating hamburgers, thinking, This is Marlon Brando!” she said before suggesting she might write more about it in a book someday.

Another one of Rogen’s favorite Babs stories is when she smoked pot with the actor Peter Sellers.

“I was married to Elliot and he [Sellers] was with Brit Ekland,” Streisand recalled before saying they had what seemed like a hilarious conversation about mixing up food, like eating “steak ice cream.”

Speaking of steak, Streisand’s character in The Guilt Trip eats a giant 50-ounce steak. She admitted she tried to get the director to cut the scene, but since the film is based on a true story and the writer’s mother really did eat a 50-ounce steak, she decided to do it.

“I ate that steak for three days, for my art,” she said, and confessed, “I don’t love steak, I’m afraid I’m going to choke on it. I love the first bite, and then it’s disgusting to me. At times we had to substitute watermelon — burn the watermelon and make it look like steak.” Ew.

Streisand said Rogen was funny on and off the screen, citing the fact that he started doing stand-up comedy when he was only 13.

Enjoy this YouTube clip of Seth doing stand-up from 1996 (warning: the host says one curse word in the beginning, but Rogen’s set is clean):