The 29-year-old brother of Chris Evans was arrested on Tuesday night trying to buy drugs from an undercover police officer. Oops. 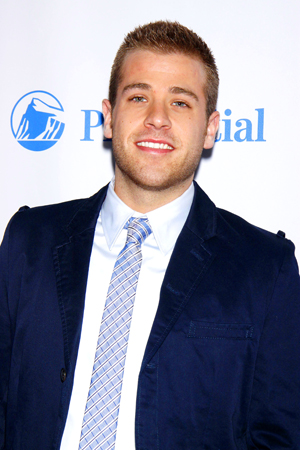 Where’s Captain America when you need him? Undercover cops busted actor Chris Evans‘ younger brother during a drug bust, according to TMZ.

Scott Evans, 29, was busted on Tuesday night trying to score narcotics from an undercover LAPD officer. He was arrested and bailed out early Wednesday morning.

“Most ridiculous night of my life in LA so far,” he posted on Facebook after the incident, according to the New York Daily News. “At least I made it a year before getting arrested.”

Evans — currently filming Behaving Badly with Selena Gomez — moved to Los Angeles a year ago from his hometown in Massachusetts. He got his start in acting on One Life to Live as Officer Oliver Fish. The role earned him a lot of attention, mostly because he was part of the first gay sex scene on a daytime drama. He was later written off the show when the storyline “failed to resonate with viewers,” according to Zap2it.

However, rumors emerged that he and on-screen love interest Brett Claywell were let go for partying and being difficult to work with. Claywell denied it, though.

“Scott and I treated each scene and each moment with the dedication and respect it deserved, and poured our hearts into those roles. Any stories to the contrary, especially this one, are malicious and offensive,” he told Zap2it.

Not a shocker: Flavor Flav arrested for threats >>

No word what drugs Evans was busted allegedly trying to buy, but we’re sure we’ll hear soon enough.