Jay-Z surprises everyone on the R Train on the way to his final show at Barclays Center in Brooklyn. It’s all chronicled in his new YouTube documentary, Where I’m From. 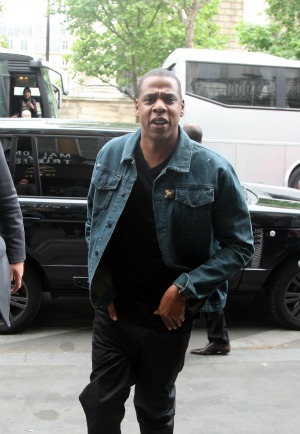 What do you do when you’re one of the most famous hip hop artists in the world? Why, take the New York City subway to your next gig.

In a video that’s gone viral all over the internet, Jay-Z proves that he’s keeping it real in his YouTube documentary, Where I’m From. The short film documents his eight shows at the brand-new Barclays Center in Brooklyn, which the artist helped develop.

For his final show, Beyonce‘s husband decided to take the subway to the venue. The fans and photographers mobbed the train platform trying to get a glimpse of the music mogul. Once he got on the R train to Brooklyn, he had an interesting encounter with a woman who had no idea who she was sitting next to.

That woman is artist Ellen Grossman who, according to her website, is known for “drawings and sculpture of topographic surfaces.” There’s no doubt Grossman was tipped off that she was sitting next to someone important given the chaos and all of the cameras, but their interaction is priceless.

In the documentary, Grossman asks, “Are you famous?”

Jay-Z humorously replies to the artist with, “Not very, but I’ll get there someday.”

After they discuss his shows, she compliments him on taking public transit to the venue. Then, the native Brooklynite asks him one more time what his name is.

When the hip hop star answers, that’s when the recognition sets in and Grossman immediately exclaims, “Oh you’re Jay-Z! I know about Jay-Z!”

Now, the New York artist is becoming a celebrity in her own right as the media descends on her for quotes about her famous encounter. She told the Daily Intel today, “I loved it! It was very energizing talking to Jay-Z. Just who he is, not having to do with all the cameras, but he really, genuinely spreads an aura of empowerment around him.”

If you’re looking for Grossman, she’s fending off jealousy from her 12-year-old granddaughter and responding to Facebook friend requests. Otherwise, you just might find her hanging with Jay-Z the next time he performs. As she told the online column, “Now I want to see the show!”