There’s so much to love about this week’s Vampire Diaries. We’ve got sneak peeks galore. Plus a few sneaking suspicions… 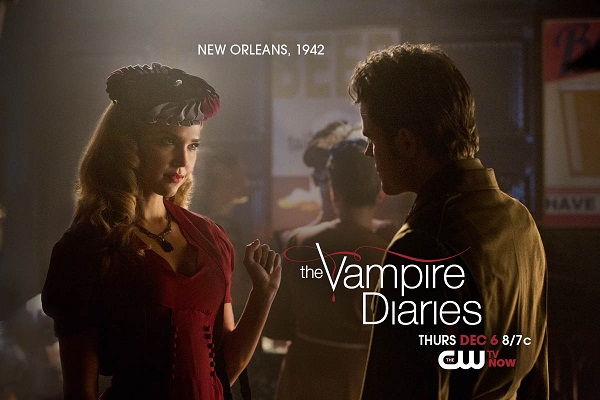 Last week Elena (Nina Dobrev) and Damon (Ian Somerhalder) finally went PG-13 on each other. At least half of The Vampire Diaries‘ fans rejoiced, too. This week, however, it looks like we’ll see the boys steam things up with another lady. This one, though, is either dead by now or close to it — assuming she was ever alive to begin with, that is.

Stefan (Paul Wesley) is incapable of believing Elena would ever choose his brother over him, so he’s convinced himself it’s not real. He’s determined that the only reason Elena now melds so well with Damon is because he’s her sire, the one who made her a vampire. Stefan develops a simple solution to test his theory and convinces his brother to play along.

Later, in order to confront Stefan’s suspicions, the brothers will head to New Orleans. Once there, a flashback to their lives in 1942 during World War II will help put things into perspective. Who was the girl who was so prominent in their lives back then? Was she a past Elena-like girl? It sure looks that way.

Finally, while the boys are away, the girls will play. Elena’s brother is now (accidentally) on a constant mission to kill her. Since she can’t live with him, she’s moved in with Damon and Stefan. That’s not at all awkward. In desperate need of some girl time, Elena invites Bonnie (Kat Graham) and Caroline over for some girl talk and wine cellar exploration.

Once the girls are huddled up and the wine starts flowing, what secrets will be revealed? If Elena tells the girls about her night with Damon, how will they react? Hopefully, they’re more supportive than Stefan.

Stefan. Ugh. Sure, he’s supposed to be in love with Elena, but couldn’t he be a little nicer to his brother? Damon is a hot and not-entirely-bad guy. Why is it so unbelievable that Elena could choose him of her own free will?

Here’s to hoping Stefan’s wrong, just so he has to apologize for being a jerk to Damon.

More on The Vampire Diaries