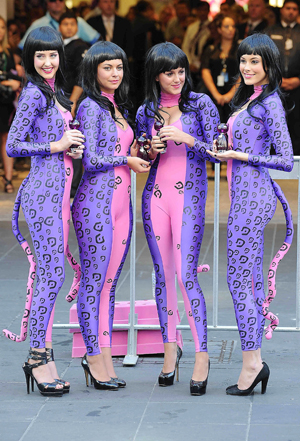 Katy Perry is interested in making you smell: the singer-songwriter-wig lover has inked a deal with Coty Inc. that will ensure soon-to-be released perfumes will be widely available.

Perry is not new to the fragrance world. She released fragrances Purr and Meow! in 2010 and 2011 respectively, but those perfumes were aimed at the more rarefied markets: department and specialty stores. When Purr was first released, in fact, it was sold exclusively at Nordstrom.

With the Coty deal in hand, Perry’s perfumes will now be shelved at drugstores and discount markets like Walmart and Walgreen’s, and priced to move.

Perry’s new perfumes will join a positively mind-boggling array of celebrity scents. Coty has the five best-selling celebrity fragrances, including Beyonce’s Heat, a blockbuster ranked #43 on Amazon for fragrance sales, just behind such heavy hitters as Red Door by Elizabeth Arden and Midnight Fantasy by Britney Spears.

But the real giants of the celeb perfume world are Jessica Simpson, who has rolled out variation after variation on her popular Fancy line of perfumes, and Britney Spears, an old hand at the perfume game who endorsed her first fragrance, Curious, in 2004. Spears’ other fragrances, such as Fantasy and Midnight Fantasy, are perennial best sellers on Amazon.

Jennifer Lopez has been called the “pioneer” of the celebrity perfume world, rolling out JLo Glow in 2002 with Coty. To date, it has earned almost $1 billion in sales.

Coty’s senior VP for global marketing Steve Mormoris told the Pittsburgh Post-Gazette last year that “Celebrities touch the fans through the power of fragrance, offering an emotional and sensorial connection.” But in real life, the stars have little to do with their fragrance.

They’re not in the perfume lab, adding a dab of this and a touch of that. Best-case scenario involves the celeb picking a scent from a selection of several. More often, the celebrity in question just licenses his or her name and image to the fragrance company.

No matter: Celeb scents are huge and look to remain so, with scents on the market from celebrities as varied as Lady Gaga, Kim Kardashian, Usher, Shakira and Tim McGraw.

What will Perry’s new fragrances smell like? No word yet, but Purr’s ad copy describes it as smelling of “peach nectar and forbidden apple” (forbidden apple? wtf?) with notes of jasmine, rose, sandalwood and musk. It comes packaged in a purple kitty bottle with rhinestone eyes (that’s Perry pushing Purr in the image that accompanies this post).

Meow! comes in a similar but pink bottle, and is said to “command a soft sexuality appropriate for use during any time of day.” Yep. Sorta like a bra that shoots fireworks is appropriate for any event.