Last week, Lindsay Lohan was arrested after a run-in with a psychic at a club and reports flew that the fight was over The Wanted’s Max George. This week, The Wanted denies those claims… but still look out for Lindsay. 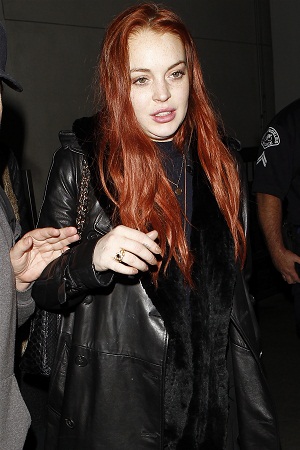 Lindsay Lohan earned some bad press yet again last week. During a trip to a nightclub where U.K. boy band, The Wanted‘s Max George and Jay McGuiness were also partying, Lindsay found herself amidst a scuffle with a fortuneteller.

Reports immediately flew that the bar brawl was over George, since he was nearby at the time of the fight and subsequent arrest. However, his bandmate, Jay McGuiness, claims that’s not true.

“It’s a bit of a blur, actually,” he told MTV news during a backstage interview at the Jingle Ball in Los Angeles. “It was very odd. We actually carried on partying after that. It was reported that [the fight] was about Max, but I don’t think it actually was.”

McGuiness went on to say Lohan was a “total sweetheart” when they met on the night of her arrest.

She obviously left quite the impression on the boys from the U.K. In response to all the drama surrounding Lindsay and her arrest at the club, McGuiness took the opportunity during a concert at Madison Square Garden to show off a self-made T-shirt with “Free Lindsay” scrawled across it in permanent marker.

He later explained the move by saying, “And, yeah, after a small scuffle that went down, I felt very sorry for her. I wanted to cheer her up and I think she said she liked it, right?”

Those are pretty kind words from a band who recently said if they ended up at a One Direction concert, they’d probably get arrested. While McGuiness and his mates’ lobbying may have scored Lindsay’s immediate release, she’s still in a heap of trouble.

The nightclub fight is far from the only offense facing the star of the poorly received Liz and Dick. Linds is facing an assault charge in New York as well as multiple counts brought by the Santa Monica City Attorney in connection with her June 2012 car crash. Meanwhile, Linds is still on probation from 2011’s attempt to lift some jewelry.

Oh, LiLo. Just like The Wanted, we’re rooting for you!