Anne Hathaway can’t stop crying. The actress gets emotional when thinking of her character in The Dark Knight Rises. Apparently, playing Catwoman left a strong impression. 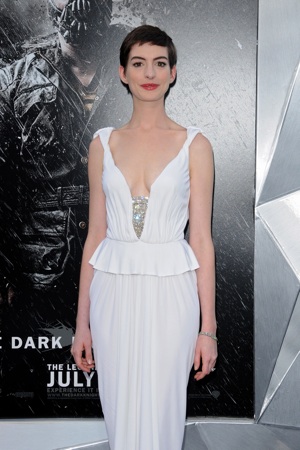 The Dark Knight Rises has come and gone. It’s been well over a year since its stars embodied their characters, but Anne Hathaway‘s having trouble letting go. The actress, who played Selina Kyle, really misses the character.

At the moment, Hathaway’s sporting a short cut and her signature smile. But, earlier this summer, she had a long mane and a steely glare. In The Dark Knight Rises, she was the iconic Catwoman, a character known for her intelligence, agility and of course — catsuit.

Anne Hathaway is Catwoman in The Dark Knight Rises >>

Hathaway tells Access Hollywood she would love to play Selina again. “No one’s talked to me about it,” she says. “I would love it. I actually, it’s so embarrassing, I was at a press Q & A thing the other night for a screening of The Dark Knight, and the moderator asked me, ‘So what was it like to say goodbye to the character?’ And I burst into tears, because I miss her.”

The actress has a genuine emotional attachment to the character. “It just makes me cry,” she says. “I miss her. I love Selena so much and I love her presence in my life and getting to… I’m crying again.”

Hathaway jokes, “So, assuming there was enough Kleenex in the world, I would love to do a spin-off.” If she ever reprises the role, she’ll be doing it without Christopher Nolan. The director has made it pretty clear he’s moving away from the superhero genre.

So, who’s brave enough to give this feline a solo movie?