Tattoo artist and reality star Kat Von D was so disturbed by her alleged stalker that she went to court to get a restraining order, but it will only last a month. 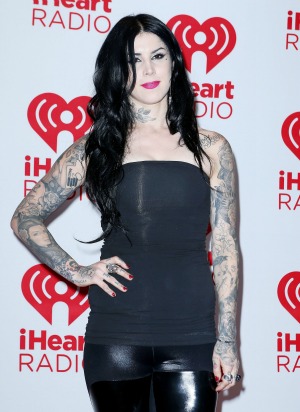 An LA judge has granted reality TV star Kat Von D a temporary restraining order for what she calls a “crazed fan.” Von D said the man was showing up at her home and sending her “creepy” messages online.

“Kat just filed her request for the stay-away order in LA County Superior Court, claiming a man named Michael Nunn has been contacting her relentlessly on Twitter — talking about her personal business and even posting her home phone number on the web,” said TMZ. “Kat says she’s had multiple close encounters with Nunn over the last seven months — first in April, when he showed up at her house and called her phone… and again in June at a public event.”

The LA Ink star said Nunn has also been sending her messages “non-stop” on Twitter, and she believes he has “delusional and paranoid tendencies, including the belief that the FBI is watching him,” said TMZ.

The restraining order is only temporary for now, but requires Nunn to stay at least 100 feet away from Von D and to stop contacting her through the Internet. The judge set a hearing for later this month to decide if the restraining order should become permanent.

In May, Nunn reportedly sent a box of candy to Von D’s home, using her real name Katherine Drachenberg, according to the Huffington Post. The incident where Nunn tweeted out her personal number came later that month when she asked him to stop contacting her. He then took to Twitter, sending out the number.

It looks like Von D may not be the only interest of Nunn’s though. According to the Huffington Post, he has also recently tweeted other celebrities (and they are quite the eclectic mix), including Piers Morgan, Mike Tyson, Nikki Sixx and Hugh Hefner.