Anna Wintour might be switching up careers soon: She’s reportedly in the running to become the United States Ambassador to France or England. 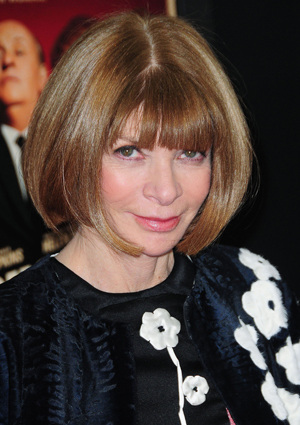 Will Vogue’s much revered (and feared) editor Anna Wintour become U.S. Ambassador Wintour? It’s possible, according to Bloomberg. The 63-year-old is reportedly on tap to become ambassador to either France or the U.K. as President Barack Obama‘s thanks for being a top fundraiser.

The British-born Wintour reportedly is one of Obama’s top 10 fundraisers. She held a $40K-a-plate dinner earlier this year at Sarah Jessica Parker’s home and another $38,500-a-plate dinner at Harvey Weinstein’s Connecticut house in August.

But, will she take it? She organizes all these fundraisers, but told the Wall Street Journal in 2011 that she doesn’t have political ambitions.

“With all the new media outlets out there, with all the noise, a voice of authority and calm like Vogue becomes more important than ever,” Wintour told the paper. “The more eyes on fashion, the more opinions about fashion, the more exploration of fashion around the world, the better it is for Vogue. Vogue is like Nike or Coca-Cola—this huge global brand. I want to enhance it, I want to protect it, and I want it to be part of the conversation.”

Maybe BFF Michelle Obama changed her mind? Wintour names the first lady as one of her biggest idols.

For now, we’ll have to contemplate whether she’ll be good at the job. Reps for Vogue and the White House denied that she’s up for a government position.

Do you think Anna Wintour would make a good U.S. Ambassador?