New mom Snooki just got through with her first pregnancy experience and decided to share some of what she learned with future mom Kate Middleton. 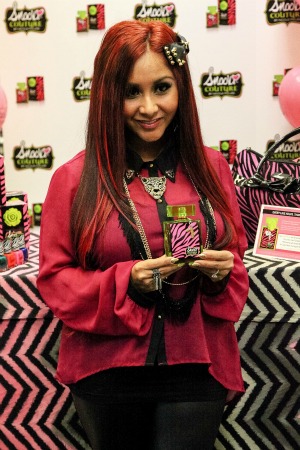 Only a few months into motherhood, Snooki already thinks she is expert enough to give parenting advice to a mom-to-be. Kate Middleton and Prince William announced Monday they are expecting their first child, and the Jersey Shore alum has delusions of being Kate’s mommy mentor.

Nicole Polizzi told the New York Daily News she wanted to send best wishes to the new parents-to-be. Her son, Lorenzo, was born in August, and she seems to be enjoying her time as a new mom but talks about how she misses being pregnant.

“It’s hard, but don’t stress out!” Snooki told the Daily News. “Enjoy your pregnancy and be excited.”

She also said it’s easy to get distracted, but it’s important to just cherish each moment with your child, while also sharing her vast knowledge of how royalty lives.

“Enjoy your time at home — or the castle, in her case — with the baby,” she said. “Especially the first few months.”

Middleton and her husband, Prince William, announced their pregnancy on Dec. 3, after the mom-to-be was admitted to a hospital for nausea and morning sickness. According to Good Morning America, the couple had wanted to wait until Christmas to announce the news but knew the media would learn they were pregnant when she was admitted to the hospital.

Snooki’s baby was maybe not as planned as the royal couple’s but was also big news in the media when it was announced. It seems she wants to let the couple know that in the end, it is just you and your baby and to cherish them.

“You’ll get to know him/her, keep them safe and fall more in love each day!” she said. “Congrats to Will and Kate. I’m sure she will be an amazing mom.”

Sources told Good Morning America that Middleton is less than 12 weeks along, which would make it a summer baby. Both Kate and Will are said to be excited at the news.