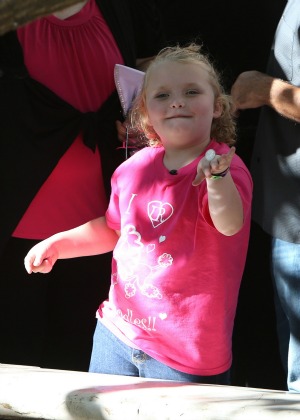 Barbara Walters has added another celebrity to the “Most Fascinating” list. Brace yourself, because this pint-sized star has made waves throughout 2012 for her catchphrases and her reality show charm.

Us Weekly is exclusively reporting that Honey Boo Boo, also known as Alana Thompson, joins the ranks of Olympic Gold Medalist Gabby Douglas and Secretary of State Hillary Clinton as one of the biggest newsmakers of the year.

The 7-year-old first came into the spotlight in the TLC show, Toddlers & Tiaras. She became such a breakout star that the network gave Thompson’s entire family their own reality show. Here Comes Honey Boo Boo became a summer ratings sensation, and it even beat the Republican National Convention broadcast back in late August.

Walters already knows that her pick will cause some controversy. As she told Us, “A lot of people will say, ‘For heaven’s sake, this is ridiculous, this is a child at 5- or 6-years-old entering beauty contests.’ But the relationship between Alana and her mother — that’s the story, the two of them. It’s very touching.”

The family continues to make news with Thompson’s teen sister Anna having a baby with three thumbs to cousin “Crazy” Tony getting arrested last weekend for reckless conduct, while dressed as a gorilla.

Some of America can’t seem to get enough of the grade-schooler, while others, like The Voice judge Adam Levine, called the TLC show, “The decay of Western civilization,” in a recent GQ magazine interview.

If you are dying to see Walters’ interview with Honey Boo Boo, check out the ABC special on Dec. 12.