Former House Speaker Newt Gingrich is the latest politician to join the ongoing cameo list on NBC’s Parks and Recreation. 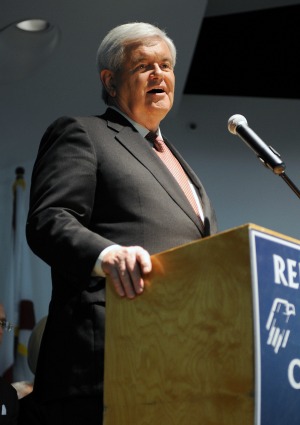 If you loved Vice President Joe Biden‘s recent cameo on NBC’s Parks and Recreation, get ready for another politician to join the TV ranks. Newt Gingrich will be the next Washington, D.C. star to get ready for his close-up.

In a random encounter, the former House Speaker stopped by the St. Elmo Steak House in Indianapolis, Indiana for lunch. The cast and crew just happened to be filming an episode for the character Ben Wyatt’s (Adam Scott) bachelor party.

The former presidential candidate was in town for a meeting with Governor Mitch Daniels and it was the show’s co-creator Mike Schur who decided to take advantage of the situation.

He told The Indianapolis Star, “It was a completely random chance. But you can’t pass up on an opportunity like that.”

Other cast members who were filming with Scott included co-stars Chris Pratt, Nick Offerman, Aziz Ansari, Jim O’Heir and Rob Lowe. The irony was not lost on Lowe, though.

He remarked to the newspaper, “I love, ironically, that we had to come to Indianapolis to have Speaker Gingrich. No, we didn’t have him in Washington. We have him at St. Elmo’s.”

Lowe, of course, was one of the stars of the 1985 Brat Pack movie St. Elmo’s Fire, about college graduates making their way in the D.C. political scene.

The upcoming episode will be chock-full of guest appearances, including Indiana Pacers players Roy Hibbert and Miles Plumlee.

Gingrich and Biden join the ranks of other politico cameos in the NBC comedy. Several senators have made appearances on the sitcom including Olympia Snowe, John McCain and Barbara Boxer.