Former Girls Next Door star Holly Madison is the latest pregnant celebrity to be hit with morning sickness requiring a hospital visit. 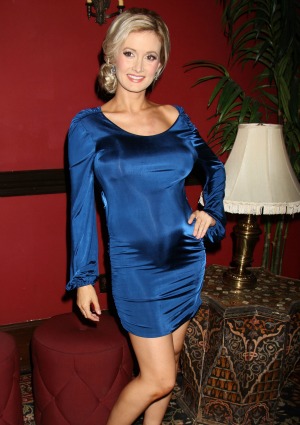 It looks like celebrity morning sickness is the latest trend after Kate Middleton was hospitalized with hyperemesis gravidarum earlier this week. Now, pregnant Holly Madison is suffering from complications from her morning sickness ailment close to her third trimester.

The 32-year-old was hospitalized and treated with an IV to pump fluids back into her system. The former Hugh Hefner girlfriend tweeted out photos of her IV, her floral pajamas and her Converse high-tops while she was being treated at the hospital.

She shared the hospital trip with her followers, stating, “Almost seven months and morning sickness took hold! Glad to be otherwise OK, though.”

The Playboy Playmate is pregnant with her first child with boyfriend Pasquale Rotella, a Las Vegas party promoter. While Madison is concerned about her health and delivering her first baby, her boyfriend is in quite a bit of hot water.

Rotella has been embroiled in a legal mess stemming from two people who died at one of his events earlier in the year. In addition, he has been indicted on charges of embezzlement, bribery and conspiracy in a theft case from the Los Angeles Memorial Coliseum. Those charges could land him in jail for up to 14 years.

The Girls Next Door star didn’t seem fazed by her hospital visit nor her baby daddy’s legal issues as she tweeted out thanks to all of her followers.

She responded to her fans’ messages for good health with, “Thank you for all the get well wishes! Keeping me entertained — forgot to bring a book with me.”

Madison is due to give birth in March.