SheKnows catches up with American Idol alum Kristy Lee Cook in Nashville, Tennessee as Cook is set to release her third studio album. 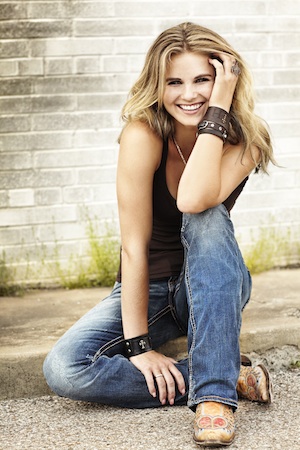 Kristy Lee Cook was first introduced to American audiences through the widely popular television show American Idol back in 2008 during the show’s seventh season. Cook made it all the way into the top 10 but was eliminated shortly thereafter. Now at 28 years old, Kristy Lee Cook has a new record deal with Red Bow Records and, with a few albums already under her belt, hopes 2012 will mark her big break onto the country music scene. SheKnows caught up with Cook in Nashville, Tennessee at the Hard Rock Hotel.

SheKnows: Most people know you from American Idol. Tell us about your experience.

Kristy Lee Cook: Overall it was pretty stressful but I wouldn’t trade it for anything. I met a lot of neat people and it gave me a huge platform — you know, that’s part of the reason I’m here today. Overall, it was awesome.

SK: The new American Idol judges are Keith Urban, Mariah Carey and Nicki Minaj. Are you bummed you didn’t get on this [upcoming] season? Are you happy with the season you were on?

KLC: I don’t know. I’m happy with the season I was on because I am happy with the way things turned out. I don’t know what to expect now [with the new judges]… I don’t know, you know, it’s television, [the producers] like drama and stuff. Any time there was something going on that was dramatic people were trying to film it. I really like the fact that Keith is going to be on it because, you know, he’s a real artist: he writes, he sings, he’s a performer. So I think that [he] will be a really good one to have.

SK: You’ve said that Simon isn’t a real artist and that he doesn’t totally get it. Do you think that affected how he was on the show?

KLC: He’s very confident and cocky. How he is on camera is pretty much [how] he is in real life. He said, like, one thing nice to me when I was eliminated.

SK: So American Idol was four years ago and now you’ve moved forward. Let’s talk about your album that’s going to be released soon. Jason Aldean is the executive producer on it — how has it been working with him?

KLC: It’s really crazy. I never thought going from Idol [to] saying my favorite country music artist is Jason Aldean, I never thought he was going to be producing my record… He’s very good with having ideas and recommendations and what I should try in the song. He’s very smart — you know he’s been doing this for a long time and one of the cool things is that he actually sings on one of the songs with me, “Dirt Cheap.” It’s really cool to have him on one of my songs.

SK: What can we expect on the record? What’s your inspiration?

KLC: One thing I like is there is a lot of variety on the album. And I really like that because I don’t really know anybody that likes just one genre of music or one kind of sound. People like a lot of stuff. Not that [the album] is a different genre but it’s just some really heartfelt ballads, some uplifting ballads, it has rock and fun summertime songs, and it’s got some sassy stuff.

Thanks so much Kristy for taking the time to chat with SheKnows. You can check out the music video for Kristy Lee Cook’s latest single “Airborne Ranger” below.