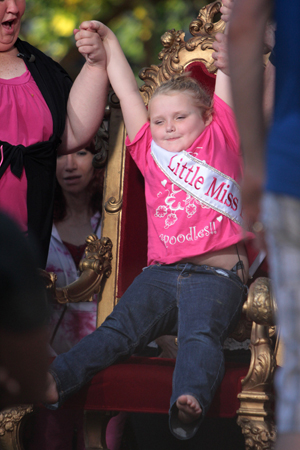 Asked by GQ if he’d rather wake up as a Honey Boo Boo parent or a non-famous person, Levine let loose.

“Seriously, Honey Boo Boo is the DECAY of Western civilization,” he said. “Just because so many people watch the show doesn’t mean it’s good. So many people witness atrocities and can’t take their eyes away from them, but that doesn’t mean they’re good.”

Adam Levine lashes out at Honey Boo Boo and family >>

He went on to call Here Comes Honey Boo Boo “The. Worst. Thing. That’s. Ever. Happened,” and Honey Boo Boo’s treatment by her parents “despicable.”

“F**k those idiots. They’re just the worst,” he ranted.

The ladies of The View had a field day with Levine’s comments Tuesday, gleefully remembering high points from the Honey Boo Boo show, including one episode about dumpster diving. Amidst scorn from Barbara Walters and Elisabeth Hasselbeck, Sherri Shepherd admitted she was a fan.

“I watch it with my sister,” she shrugged, explaining that even though the family does things she wouldn’t do (like a breath-smelling contest), “It makes you laugh, they have fun together, and the family, the sisters, are always together.”

“To each his own,” Whoopi Goldberg summed up, while Walters revealed that Honey Boo Boo is one of the 10 most fascinating people of 2012, a group she will spotlight on her annual “most fascinating” special, to air Dec. 12.