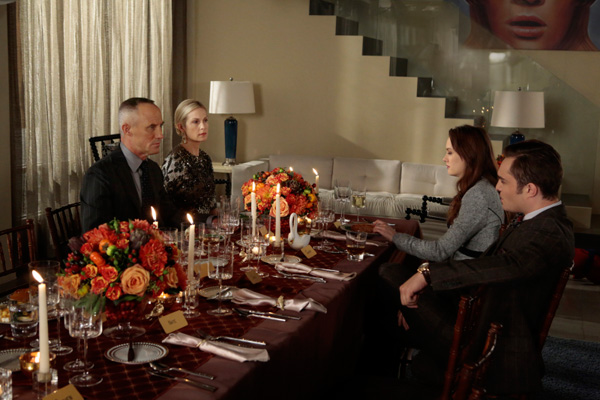 We’re only two episodes away from the Gossip Girl series finale, and yet the finish line’s never seemed more elusive. Watching this sixth season is like trying to untie one of those impossible shoe knots. The harder you pull, the worse the situation gets.

But let’s try not to worry about how far story lines have strayed off course, and instead hand out some grades (in no particular order) for Monday night’s episode (“It’s Really Complicated”). 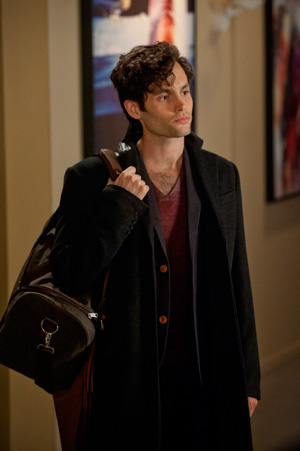 Has a Gossip Girl character ever put together such a villainous performance?

Dan and Serena start another episode in bed, and this time they’re planning to host their first Thanksgiving together. It looks like the much-maligned couple could really be back for good.

But Dan (Penn Badgley) owes Georgina and his editors the highly anticipated Serena (Blake Lively) chapter. We learn there are two versions (one a lover’s praise; the other a writer’s scathe). Which one Dan publishes is at the heart of the episode’s conflict.

“Lonely Boy” ultimately publishes the blistering version of Serena’s so-called true story. And in the process he becomes the Upper East Side’s public enemy No. 1.

Not only does this sacrifice any chance at romantic redemption with Serena, Dan also forfeits any hope of breathing through his nose — courtesy of a cold, hard Nate Archibald fist (more on that in a bit).

But Dan’s the man with the plan. And apparently, he thinks it’s working. Everything so far this season — even the pivotal elevator scene with Serena a few weeks back — has been part of his Machiavellian plot to gain respect by becoming a complete dirtbag.

If you’re like me, you were probably doing everything in your power not to launch the remote control at the screen during Monday’s final scene, where we see Dan smirking as he writes his final chapter. The only thing stopping me was the allure of endlessly replaying Nate’s right fist meeting Dan’s flesh.

Poor Rufus. So far this season he’s been: Dumped by his ex-wife, trashed all over the internet by his backstabbing son, and worst of all, conned by that slimeball Ivy Dickens.

Rufus (Matthew Settle) gets his mojo back in a big way earning this episode’s MVC — Most Valuable Character. His speech to Dan about the Humphrey men and van der Woodsen women serves as the episode’s turning point that leads to Dan getting popped in the face. Rufus’ insight about Dan’s story being a one-sided version of the truth brought back the vintage Rufus we’ve dearly missed.

Bart Bass’ worst moment of the episode wasn’t the unveiling that he’s possibly involved in the murder of two former employees.

Bart Bass earns his dubious mark by nearly popping a blood vessel while showing us his best boa constrictor impression on Lily. 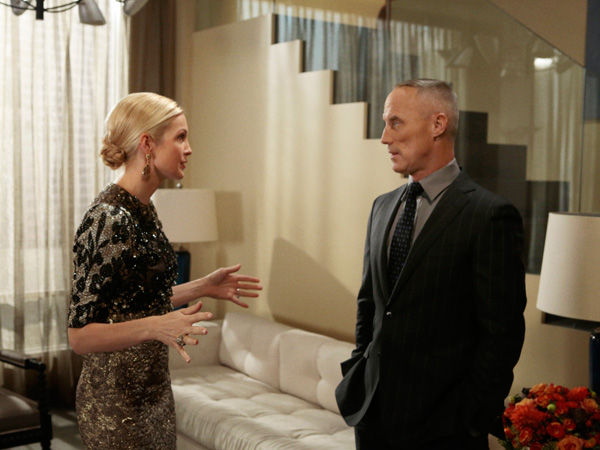 Lily’s performance this week is typical of her character this entire season. One minute you cringe at every second she shares on screen with Bart. The next you’re rooting for her to help Chuck turn the tables on his father.

Deep down, Lily still maintains some good, and she restores our faith by agreeing to finally team up with Chuck. That’s good news for Bass Jr., but will it spell disaster for Mrs. van der Woodsen-Bass-Humphrey who last appears headed off for a mini-vacation.

It may be a reach, but something tells me Lily’s days on Gossip Girl are numbered.

Nate Archibald: B minus

Nate (Chace Crawford) gave viewers the single best moment of the season so far. Seriously, who wouldn’t want to take a crack at Dan Humphrey?

If our evaluations were based solely on that seminal scene, Nate’s grade would be higher than a Miley Cyrus birthday celebration. But we’re docking him serious points because: 1) Nate’s selling out Chuck, his best friend, to avoid going to prison and 2) Nate’s back to dating Sage — a relationship with a high school girl that should land him in jail! 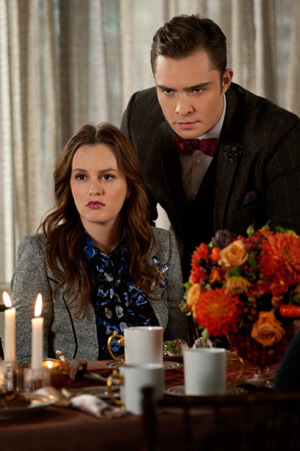 The wake-up-in-the-morning-and-drink-a-flight-of-18-year-old-scotch Chuck Bass is so much less appealing than the hopelessly-in-love-with-Blair-Waldorf version.

Chuck (Ed Westwick) just can’t stop feeling sorry for himself over his failure to conquer his father. Even when Blair shows up with… how shall we say… a Thanksgiving treat… Chuck still manages to sulk and brood.

Sure, Chuck’s had it rough. In the past two weeks, his best friend’s sold him out to his evil father. Meanwhile Blair’s enjoying nothing but success with her fashion line (which should seriously consider marketing Halloween costumes after this episode).

We’ve come a long way from Chuck Bass the odious date rapist. So far that we now consider Chuck one of the Gossip Girl heroes. And we need a hero now more than ever.

Maybe Chuck will get his hero’s reward and end up with Blair. But with only two episodes left, Chuck’s character is wasting away in a chase that looms to finish with fewer fulfillment than a wedding day with Ms. Waldorf.

This Thanksgiving, I’m thankful for Halloween stores for remaining open in November and selling Pocahontas outfits.

Blair (Leighton Meester) shows off her wardrobe range, going from one extreme (wearing nothing but bikini bottoms and feather headdress) to the other (a severely cumbersome power suit that would not have landed her on this list).

For the sake of our list, let’s pretend only the first extreme counts.

Serena van der Woodsen: A minus

No one will ever excuse Blake Lively of being a great actress. But we genuinely feel for Serena at the end of the episode after she’s once again publicly humiliated. We’re even willing to forgive her bonehead notion to invite her ex-boyfriend/near fiance (and his repugnant daughter) to Thanksgiving dinner because Serena’s performance was that deserving of our guilt.

Granted, she dug her own hole with the sex tape fiasco. But no one, especially not Dan Humphrey, can talk smack about Serena van der Woodsen on the internet and get away with it! (No one except the “real” Gossip Girl, who we’re still waiting to be revealed).

Even with Blair’s costume and Nate’s fists of fury, Gossip Girl failed, yet again, to give its viewers a solid episode.

With the end so near, there may be too many knots to untie this mess.