The fan-voted American Country Awards are about to get underway, yet one of country’s big-name crooners is already out of the running. There’s no love “this big” this year, apparently. 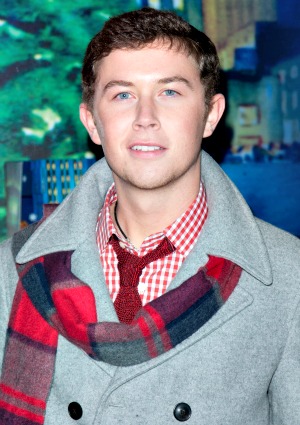 Nearly all of country’s biggest stars are headed to Vegas with fingers crossed they’ll be shown a little love and appreciation at the 2012 American Country Awards.

While the honors are doled out according to listeners’ votes, we can’t quite figure out how one crooner got passed over for any nominations at all! What’s up with that, Scotty McCreery?

Despite being the winner of American Idol‘s tenth season as well as releasing a Christmas album this year, the 19-year-old was shut out of the American Country Awards.

Adding insult to injury? Lauren Alaina, who lost to Scotty McCreery in the 2011 singing competition, is up for the coveted Artist of the Year: New Artist honor!

It’s not as if there weren’t plenty of American Country Award nominations to go around.

Luke Bryan leads the pack with the most nominations at seven, followed by Lady Antebellum and Zac Brown Band with six each.

Maybe 2013 will be the lucky year for Scotty McCreery at the ACAs?

While it’s not yet known if the Christmas caroler will attend the award ceremony in Las Vegas on Dec. 10, there’s one thing Scotty McCreery fans can bet on: he’ll be genuinely happy for whoever does win big.

The youngster, known for having a big heart, recently added doing good to his list of virtues. The “I Love You This Big” singer chose to turn his recent holiday show into a benefit for the Hurricane Sandy Relief Foundation, explaining, “Being from North Carolina, I have seen firsthand what hurricanes can do. I wanted to figure out a way to help.”

Who do you feel got left out of the 2012 American Country Awards lovefest?