The news could become one of the most-watched pregnancies in years, and there is already a sign that there is one major twist. 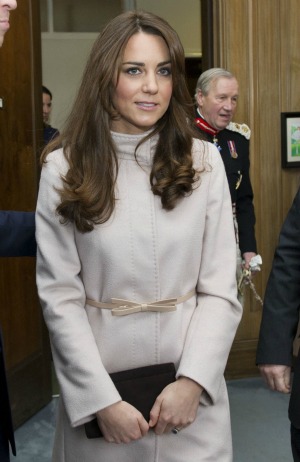 Our heads are still spinning from the news that Kate Middleton is officially pregnant, after months of wondering. But since the baby could be the future heir to the thrown, the news is especially important.

The Duchess of Cambridge’s pregnancy has brought to light a rare condition in pregnancy that is rarely talked about, called hyperemesis gravidarum. The disease “is a rare but acute morning sickness that results in weight loss and accounts for about 2 percent of all morning sickness, doctors say,” reports ABC News.

Dr. Ashley Roman, a professor and OB/GYN at New York University Langone Medical Center told ABC News that women are diagnosed with the disease when they have either lost 5 percent of their pre-pregnancy weight, or 10 pounds. But she added that there is very little danger to the baby from the disease.

“It’s traditionally thought that nausea and vomiting is a sign of a healthy pregnancy,” she said.

The important part to note about the disease, though, is that it is common in women having twins. While not everyone who has the disease will have twins for sure, it is more common.

According to the U.S. National Library of Medicine, “Extreme nausea and vomiting during pregnancy can happen if you are pregnant with twins (or more) or if you have a hydatidiform mole” (which is a growth inside the uterus).

Middleton and her husband Prince William likely will find out soon if they are having twins, but it brings up a whole new problem. The country recently made the decision to allow first-born women to be heirs to the thrown. A decision that if it had come 63 years earlier, when Princess Anne was born, would have created an entirely different royal line. In this case, it seems logical that the first-born twin would become the heir.

In 2010, it was announced that Crown Princess Mary of Denmark was pregnant with twins. While she was not first in line to the throne, her children still had to line up in the correct order.

“Under the current system of inheritance, which is based on age regardless of gender, the new Danish twins will be fourth and fifth in the line of succession,” says TheRoyalUniverse.com.

As for Middleton’s pregnancy, it could be a painful one. Dr. Nancy Cossler, an OB/GYN at University Hospitals in Ohio, told ABC News that there is no chance of birth defects or miscarriage just from the disease, but it could make for an uncomfortable couple of months.

“The biggest problem with this is how it interferes with your life,” Cossler said. “Constantly feeling sick and puking is difficult.”