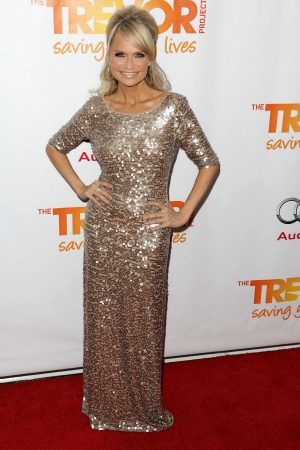 Let’s put this one in the “Strange Couple Alert” category because Kristin Chenoweth is dating former Bachelor star Jake Pavelka. The coupling was confirmed by Chenoweth herself to People at Sunday night’s Trevor Project event.

She said, “We have been spending a little time together.”

How did this duo even meet? The 44-year-old actress met the 34-year-old pilot at an event in October. There have been rumored sightings of the couple in West Hollywood and this weekend by TMZ in Jake’s hometown in Texas.

The Emmy winner has dated director Aaron Sorkin and troubled actor Lane Garrison in the past, but it’s the reality star who’s catching her eye these days. Pavelka was on Season 14 of the ABC franchise and picked Vienna Girardi as the “winner.” The couple had a tumultuous time after The Bachelor wrapped and the two eventually went their separate ways as most Bachelor couples do.

Chenoweth is currently in rehearsal for the Dec. 10 broadcast of the American Country Awards which will air on Fox. She’ll host the show for a second time alongside country star Trace Adkins.

The petite star has spent most of the fall recovering from a head injury on the set of The Good Wife. She told People, “I am doing so much better but I think it slowed me down and I’ve realized life is short. I want to do things that make me happy.”

It seems that dating Pavelka is the perfect cure for that.