Long dinged for coming off as self-important and cluelessly privileged on her lifestyle blog Goop, Gwyneth Paltrow cracks up the masses with her “bananas” Christmas 2012 gift guide. 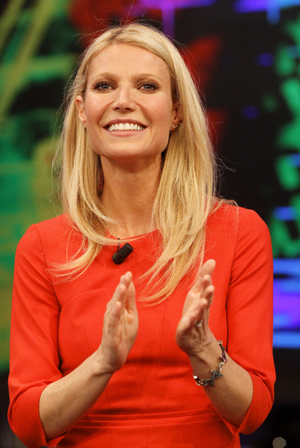 Everyone loves a $250 herb planter, but this is ridiculous: Gwyneth Paltrow’s Christmas wish-list is, as one website put it, “bananas.”

Paltrow’s lifestyle publication, Goop, has long been a fertile source of internet snark for critics who call Paltrow smug, self-important and preachy, but the site reached new heights when it published the “Wish list and great gift ideas” for 2012.

The list demonstrates a “complete lack of self awareness” snarked Entertainment Weekly about such gifts as the 24-karat gold iPhone horn (what’s an iPhone horn?), a bargain at only 649 British pounds.

Gwyneth Paltrow wants to cleanse you of $425 >>

Then there’s the $140 nautical-themed bracelet for men, the $500 Samsung Galaxy camera, a $180 wooden rope swing and designer backgammon sets for 2,000 British pounds and up.

“Bananas,” summed up Kelsey Miller at NYC e-mag Refinery29, who also said that “many items fall into the realm of things-you-will-never-ever-own. Unless you’re friends with Gwyn, in which case, enjoy your 24 KT Gold iPhone Passive Horn Amplifier. Whatever that is.”

Gawker sniped that Paltrow is “the world’s most perfect human” and Goop is “filled with insight on how to be perfect and live your life exactly how the mother of two children named Apple and Moses lives her life.”

So Paltrow lives her life listening to records on a record player made in the 1950s and available only at the rarest of audiophile auctions? Got it.

Gawker also suggested that gift-givers should upstage Paltrow by giving gifts even more precious and obscure than the ones Goop suggests. Vintage modern record player? That’s so out. The really hip are listening to gramophones these days.