The singing stars went on a date in Central Park Sunday, and they borrowed a baby to take with them. Playing Mom and Dad, huh? 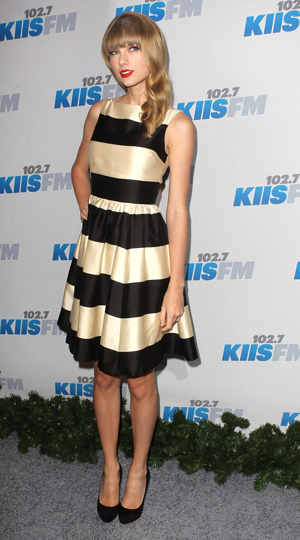 Taylor Swift (and every other girl her age on the planet) seems to have a thing for British boy band One Direction: She was spotted on a date in Central Park with One Direction’s Harry Styles. And a 15-month-old baby.

Swift and Styles toured New York’s Central Park Zoo and strolled along the winding park paths, chatting and playing with a toddler borrowed for the day.

No kissing or hand-holding was recorded, but the “let’s pretend like this is our baby!” date is one of the most serious kinds of dates out there. Way more intense than “let’s meet for coffee!”

Whose baby was that, anyway? The New York Daily News reports that 15-month-old Lux is the daughter of his stylist, Lou Teasdale.

Now, why is this stylist loaning out her baby for “try it on!” dates? The New York Daily News is mum on this question.

Fans should be all for the Swift/Styles romance: Swift is known both for her penchant for famous young hotties (John Mayer, Jake Gyllenhaal, Taylor Lautner, Cory Monteith, and Joe Jonas all were tried on for size at one point in Taylor’s dating life), as well as for writing smash-hit songs about said young hotties once the flame has gone out.

Swift’s monster hit “We Are Never Ever Getting Back Together” was even reportedly written about one of her ex-boyfriends.

Supposedly, Swift was in the studio with songwriters/producers Max Martin and Shellback when a pal of an ex-boyfriend walked in and asked about rumors that Swift and her ex were reuniting.

She began playing the guitar while she talked, and soon enough, her tales of love gone sideways were soon a hook-heavy radio hit.