In this tropical music video, the imagery is as vivid as the lesson learned. 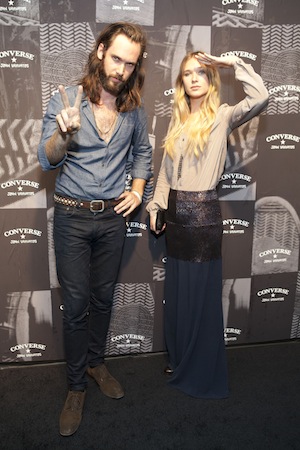 The Jamaican set and dancehall beats in “Keep You” feature a story that revolves around a couple in which the male counterpart has a wandering eye.

The gorgeous blonde (portrayed by Natalie Bergman) serves her pre-teen lover breakfast. Humorous, yet ominous, this “little man” sets a dreamy spell over all his women. With his name tattooed over each and every one of them, they appear to at first be irritated at his behavior, but when he presents a small gift, all is forgiven. (Why was my first thought of Terrell Owens?)

Each time he returns to his main woman, the blonde, she accepts him. She longs for him, and just like the rest of the women, overlooks his behavior because of his smile or any gift he brings to please her.

This video is impeccable to me. It focuses on the immaturity of a young boy, but it seeps into application to men who behave this way, irrespective of age. So often women continue to date a man who cannot be loyal, and some even continue seeing the man even while knowing he’s with other women.

The “gifts” Little Man brought to his women were all toys, but it was a childish portrayal of the same basic gestures that can be indistinguishable between men of any age. The scenic storyline was directed by Melina Matsoukas, who also did Rihanna‘s “We Found Love” music video.

In an enlightening quote told to Rolling Stone that was featured on the website Trendland, Matsoukas claimed: “It’s a story about unrequited love and how with age, we don’t necessarily mature… As a child, all we want is love and attention and that story never grows old, it just takes a different form as we age. So it’s not so much about ‘all men are boys,’ but just [that] all of us are forever young. Old habits never die.”

So maybe it isn’t just a promiscuous male-bashing video after all? We love the brother-sister band and their creative portrayal. Check it out and tell us what you think!