Ashley Hebert is a bachelorette no more after she married her Season 7 fiance, J.P. Rosenbaum, in a ceremony in Pasadena, California, on Saturday. 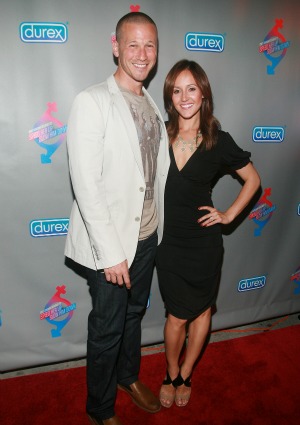 Saturday was a rainy day in Los Angeles, but that is supposed to bring the bride and groom good luck.

In a ceremony in Pasadena, California, The Bachelorette star Ashley Hebert walked down the aisle with her fiance from the show, J.P. Rosenbaum. The duo became engaged at the end of Season 7 in August 2011 in Fiji and have enjoyed a long engagement.

Hebert told People, “Today is all about our friends and family. It’s about standing with J.P., looking around at all the people we love in the same room there to celebrate our love.”

Naturally, their wedding was paid for and will air on ABC in a two-hour special on Dec. 16. The network loves to promote the few couples from The Bachelor franchise who have successfully stayed together “after the final rose.”

So far, only a few couples have walked down the aisle. They include Season 1 Bachelorette Trista Sutter and husband Ryan as well as Season 13 Bachelor Jason Mesnick and wife Molly. Jason famously dumped “winner” Melissa Rycroft on TV in order to date runner-up Molly. Otherwise, the couples have gone belly up.

The wedding was officiated by Bachelor host Chris Harrison, and many of the franchise’s alumni were in attendance, including the Mesnicks, Emily Maynard and Ali Fedotowsky.

The 28-year-old dentist and her new construction manager husband are living in New Jersey while she completes her pediatric residency in Philadelphia and he works in New York.

As Hebert told Us Weekly, “This is going to sound pretty cheesy, but we are pretty compatible.”