Tina Fey’s daughter, Alice, is growing up. And on Thursday night, 30 Rock fans got a chance to see how much like her mom she is. 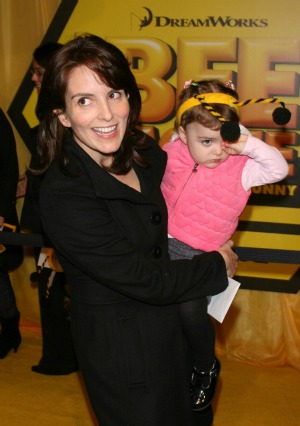 Liz Lemon finally got married on Thursday night, after seasons and seasons of failed relationships, but she wasn’t the biggest star of the night — at least not in the way we know her.

The 30 Rock episode featured many flashbacks of a young Liz Lemon and her dreams of her wedding, but fans of Tina Fey‘s may have recognized the young Lemon as a spitting image of the older Lemon. That’s because she was played by Fey’s real-life daughter, Alice. Alice is 7 years old. Fey and her husband, Jeff Richmond, also have a 15-month-old daughter, Penelope.

The episode featured Liz Lemon and boyfriend Criss Chros (James Marsden) when they decide to get married. The two have been trying unsuccessfully to adopt a child. When they see that Lemon’s ex Dennis Duffy has been able to adopt, simply because he is married, they decide that marriage is the way to go.

But when they get to the courthouse, in their sweats, Liz starts to wonder if they should have tried harder at planning a wedding. She starts flashing back to her childhood and the wedding she had always dreamed of. That is where young Liz comes in, with her bowl cut and Liz Lemon attitude (the younger Fey played a younger Liz in an earlier episode of 30 Rock).

“It seems Alice has certainly inherited plenty of attitude from her mother and managed to perfect Fey’s signature eye-roll,” according to the UK Daily Mail.

After seven seasons, 30 Rock will air its final episode on Jan. 31, 2013. With the plotline the last few seasons based on Liz Lemon’s attempts to get pregnant, there is a good chance that will be an important part of the last episode. Just before that happens, Fey will join her friend Amy Poehler to host the Golden Globe Awards on Jan. 13.

36 mins ago
by Reshma Gopaldas