Chris Brown hasn’t heard the last of Jenny Johnson just yet! The comic, who engaged in an epic Twitter battle with the singer, has turned down all interview requests — except for the opportunity to write a piece for GQ. 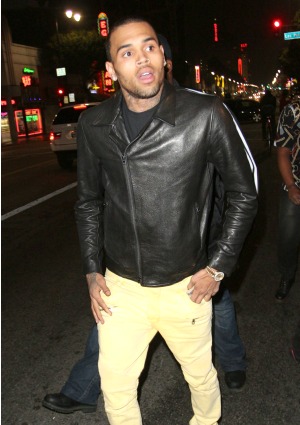 Jenny Johnson never expected a few tweets exchanged with Chris Brown to make headlines. The comic, who was unaware the entertainment world would react so strongly to their vulgar exchange, explains her experience of the past week in a piece for GQ.

“This is not an apology,” Jenny Johnson’s Chris Brown post begins. “I just want to clear some things up. My first thought following my Twitter exchange with Chris Brown on Sunday was to ignore it until it went away.

“The exchange I’m referencing would be the one where he tweeted he looked old for 23, and I replied with a not-so-kind comment. From there we discussed farts, spelling, past events, bushpigs, and which part of my eye he wanted to go number two on. It ended with him deactivating his Twitter account.”

Recap complete, Jenny Johnson went on to explain she never expected her name to make headlines or that dozens of media outlets like The View would be clamoring for her to give interviews.

“I won’t say I regret what I did, but I will say I have learned from it,” she wrote. “I’ve had people assume I dislike Chris Brown because I’m taking up for Rihanna, I’m not. I’m on the side of good, of equality and respect for my fellow woman. I was raised to not respect a person who doesn’t respect others. And one human being physically harming another human being is one of the most disrespectful acts there is.”

Making predictions on what will capture entertainment news’ attention next, Jenny Johnson went on:

“By next week Miley Cyrus will marry a shoe, Justin Bieber will meet the Pope wearing a wetsuit, Kim Kardashian will announce she’s pregnant with a sea turtle, and everyone will move on. Even though I promised myself I would remain quiet on this subject, I just felt the need to clear the air on these certain topics.”

Addressing Chris Brown fans who are angry he deleted his Twitter account after their spat, she concluded, “Don’t worry Team Breezy, your hero is still on Instagram under the handle F**kYoPictures. #Classy.”

What do you think of Jenny Johnson’s Chris Brown non-apology piece?