If you are a film student in college, this might be your chance to go to the 85th Annual Academy Awards. 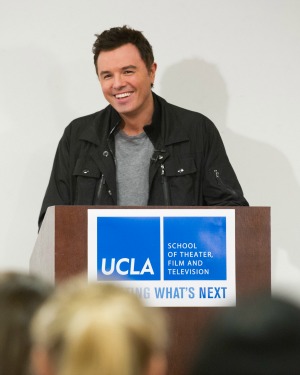 It looks like there is a changing of the guard in Oscar models. Out are the tall, statuesque models handing the awards to the presenters, and in are college students who are aspiring filmmakers.

On Friday, mtvU — MTV’s 24-hour college network — and this year’s Oscars host, Seth MacFarlane, announced “The Oscar Experience College Search.” It’s all a part of encouraging the next generation of Hollywood hopefuls and possible Oscar winners.

MacFarlane is the latest guest professor for the mtvU series Stand In. He recently spoke at the University of California Los Angeles for the “Overview of Contemporary Film Industry” course, and that’s when he revealed the big news.

In an Academy press release today, the Family Guy creator said, “For a film student to go to the Oscars and be a part of presenting is a huge break.”

The winners will be determined by the show’s producers, Craig Zadan and Neil Meron, with a minimum of six winners being flown to Los Angeles to be a part of the 85th Annual Academy Awards on Feb. 24. Contestants will need to complete an entry form and shoot a video that answers the question, “How will you contribute to the future of movies?”

The contest runs through Jan. 19, and more information can be found on The Academy’s Facebook page.

It is a great opportunity for any budding Steven Spielberg or George Lucas.

As producers Zadan and Meron stated, “In reimagining what we want the Oscar show to be, we wanted everyone appearing on that stage to feel a deep commitment to film and its legacy, and most importantly, its future. That was the impetus in creating this special honor for young film students who will inspire a new generation to create the films that will be honored in the future.”