Wendy Williams’ nude PETA pose is heating up the web! Wearing nothing but a “fantasy hair” wig, the talk-show host showed off some serious skin for the “Go Naked” campaign. 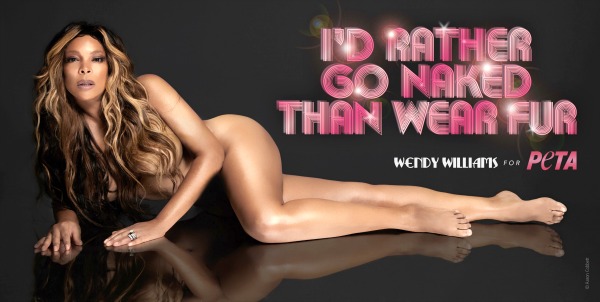 Wendy Williams‘ nude photos are no tabloid scandal, though they’re still a bit scandalous! The racy images of the talk-show host wearing not a single stitch of clothing have been put out by People for the Ethical Treatment of Animals, known by most as PETA.

As the latest celebrity to strip down for the “Go Naked” campaign, Wendy Williams posed completely nude, carefully concealing her private parts with just the long hair of a specially made wig.

“We should all try to be comfortable in our own skin and let the animals keep theirs,” the 48-year-old, who was happy to pose nude, said in a press release. “PETA has proven there is a sexy way to suggest to people to rethink the fur.”

What can you do to help? Aside from not buying fur, obviously, Wendy Williams is encouraging the public to donate their used fur coats to PETA, who in turn will pass them on to the homeless and victims of Hurricane Sandy.

PETA gives Miley Cyrus a pig for her birthday >>

The talk-show host — who revealed previously she wears wigs because she has thyroid disease, which causes her natural hair to be very thin — joins a long list of celebrities who’ve gone nude to support the cause. Christy Turlington, Eva Mendes, Holly Madison, Joanne Krupa, Kat Von D and Pamela Anderson have all lent their famous figures to PETA in the past.

Check out a behind-the-scenes look at Wendy Williams’ PETA shoot:

What do you think of Wendy Williams’ nude pose for PETA?