My, my, my how things have (sort of) changed! Do you remember our very first Thanksgiving with Gossip Girl? We do! In 2007, we had two Thanksgivings as we were also offered flashbacks from 2006. Boy, was that a year. 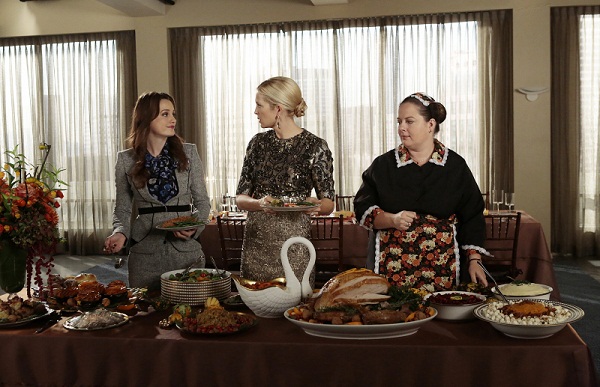 And a lot changed during that single year.

In 2006, as Dan (Penn Badgley) was bringing home a pie to his (entire) family, he ended up saving a drunken blonde girl from a fateful encounter with the hood of a taxi. He lost the pie, of course, but he rescued the beautiful girl. Upon telling the story to his parents as they sat around the table, Dan and Jenny’s mom commented about how their dad always had a thing for crazy blondes, too. Sure, she’s as blonde as her daughter, but she doesn’t consider herself crazy: that’s a right reserved for someone else. 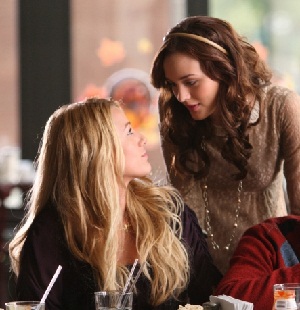 By 2007, Dan had finally worked up the courage to talk to that crazy blonde. He and Serena (Blake Lively) were dating. Also, Dan and Jenny’s mom was no longer living with the family. She showed up for Thanksgiving, though… making things awkward when Dan’s girlfriend and her family arrived to celebrate the holiday with the Humphreys. That doesn’t sound all that awkward, but here’s the thing: 2006’s “crazy blonde” was Lily, Serena’s mom. Rufus and Lily used to be inseparable, much to the chagrin of Dan and Jenny’s mom. So, Dan spent Thanksgiving with his family and the van der Woodsens went to a Chinese restaurant.

Thanksgiving was rocky for Blair (Leighton Meester) in 2007. She and her father were Thanksgiving junkies and, for the first time ever, they’d spend the holiday apart. B’s mom, Eleanor, told him Blair didn’t want him around when the truth was that Eleanor wasn’t ready to face him (and his new, male love interest). Blair was a hot mess and soon plunged face-first into her favorite pie, only to upchuck it later. Speaking of Chuck (ha!), when B decides to make up with S (because she needs a shoulder to cry on), Blair lets her in on a very big, very shameful secret: She’s slept with Chuck Bass. Twice.

There were other issues: Chuck (Ed Westwick) and his father were at odds (as always) and Nate’s (Chase Crawford) family was suffering the consequences of his father’s illegal business scheming. However, since Nate’s more or less become a background character, we’ll skip the nitty-gritty. Let’s just say things weren’t great for either of the Upper East Side boys.

Now that we’re up to speed, watch this…

Five years later, things are very different… and yet somehow the same. Rufus and Lily still can’t get themselves together, despite their brief marriage and clear love for one another. Dan and Serena are together, just like before. But without all the obstacles, things seem more permanent. Also, they’re about fifteen miles and a few socio-economic classes away from the Humphrey flat in Brooklyn. Meanwhile, Blair has slept with Chuck a lot more than just twice and it’s no longer a shameful thing. After a whole season of “just say it,” Chuck admitted to loving Blair seasons ago and he’s beside her at the table. Blair is, once again, at odds with her mother. However, she has a new family to celebrate with that’s full of friends and just as much drama.

Dig out the last of the pumpkin pie and spend yet another belated Thanksgiving with Gossip Girl on Monday, December 3, 9/8c.

Gossip Girl leaves us gagging
Gossip Girl preview: Ready for some reconciliation?
Who is Gossip Girl? The cast reveal their best bets!