After months of “are they or aren’t they?” speculation, Rihanna lets the world know she’s back with her abuser with a racy Instagram image of the two of them together. 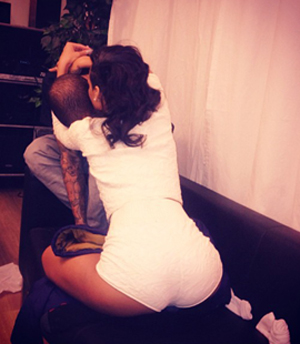 They’ve been playing coy with photographers and reporters for weeks, but Rihanna and Chris Brown are back together. At least enough to post an Instagram picture of what looks like RiRi dry-humping Brown.

The photo was joined by the caption “i don’t wanna leave!!! Killed it tonight baby!!!” which means… what? Killed what, exactly?

Kind of a poor choice of words considering Brown’s 2009 assault on Rihanna, during which he threatened to kill her in between punching her in the face, biting her ears and fingers, and finally choking her until she began to pass out.

Nonetheless, Rihanna’s photo-blurt seals the deal: The pair are back together, despite Rihanna’s denial to reporters in early November.

I guess Rihanna would rather post pictures online than actually talk to reporters, given that the debacle on her “777” tour was mostly caused by her refusal to speak to the very people she’d invited on her tour to give her press?

Fans responded to the picture of Brown and Rihanna enmeshed with support (“real love conquers all…Everybody who has made a mistake n is genuinely remorseful…deserves a second chance”) to disbelief (“How?!”).

Celebrities also have offered their advice, from Oprah, who said “Love doesn’t hurt, and if a man hits you once, he will hit you again,” to Whitney Houston, who advised Brown not to “make the same mistakes I did” back in 2009 (Houston was abused by ex-husband Bobby Brown).