Carrie Underwood’s an icon in the making. Therefore, we’re not surprised she’s tackling one of Broadway’s most famous roles. The singer-turned-actress is headlining The Sound of Music. 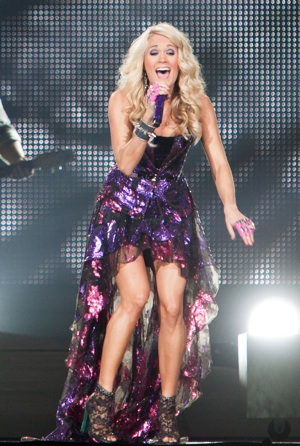 Country superstar Carrie Underwood has big shoes to fill. The Grammy Award-winner has been crowned the new Maria von Trapp from The Sound of Music. The role was famously played by Julie Andrews in the 1965 film, based on the original play.

The Sound of Music: Behind the scenes >>

According to the website TVbytheNumbers, Underwood will headline NBC’s live broadcast of the musical. Network chief Robert Greenblatt, announced the big news Friday morning. The Sound of Music will be an epic three-hour event that will air during the 2013 holiday season.

“Speaking for everyone at NBC, we couldn’t be happier to have the gifted Carrie Underwood take up the mantle of the great Maria von Trapp,” Greenblatt said. “She was an iconic woman who will now be played by an iconic artist.”

The Sound of Music cast reunites on Oprah >>

The Sound of Music will be co-produced by Craig Zadan and Neil Meron, who worked on the film versions of Chicago and Hairspray. They’re also part of the creative team behind NBC’s Smash.

“We’re thrilled to be presenting the Broadway version of The Sound of Music live,” said Zadan and Meron. “Having Carrie Underwood as the star brings it to a new generation who will fall in love with it for the first time as many millions of people already have. It’s a particular joy to us as producers to see this amazing artist stretch into new territory with this classic musical.”

This production sounds like fun! Too bad we have to wait a year to see it.

What do you think of Carrie as the new Maria?