In a faint — or feigned — attempt at winning Sectionals, New Directions faces implosion, while New York seems to be beaming with healing. 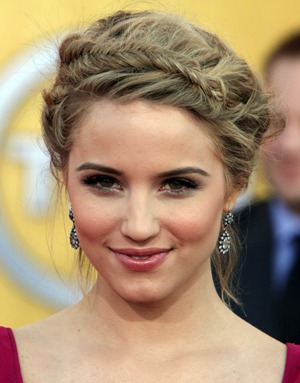 Will there be a death on Glee?

Quinn (Dianna Agron) and Puck (Mark Salling) are in one room again?

The answers are: Probably not, read on to find out, and absolutely yes!

Blast from the past

What could be a better way to remember what you’re thankful for than bringing back the original A-Team — sans Rachel (Lea Michele) and Kurt (Chris Colfer), though. The duplicates will never be as good as the originals, huh?

The question is, have the alums changed? Besides being startlingly more composed than I remember (all in a year — really?!), every new New Directioner was in awe of these legends.

But not in the way you think. The alumni became mentors to the new Gleeks, with the most animated and irritating pairing being Kitty (Becca Tobin) and Quinn. While it’s no shock to us (because we’re fans of hers too), Kitty is obsessed with Quinn. After all, Kitty reminds us of a diluted Quinn, without the class. It quickly surpasses adoration to creepy when she shows a “WWQFD” sign (What Would Quinn Fabray Do) posted shrine-like in her locker.

Check out our interview with Dianna Agron >>

Things get messy — and ruin the reunion — when the Glee alums get possessive over their proteges. Santana (Naya Rivera) finds out that Kitty has persuaded Marley (Melissa Benoist) to take laxatives. When confronting Quinn, they have a fiery exchange. Quinn is a tad bit deluded when she claims Santana is jealous of her and implies her new romantic life (one that involves sleeping with a married professor at Yale) is envy-inducing as well. Irritated by this, Santana then throws attitude at Quinn, remarking that she’s just a “teen mom” who “barely visits her kid.” Quinn slaps the sass out of Santana, and (oh boy) Quinn gets one right back. Brittany (Heather Morris) quickly intervenes, walking in before it gets worse.

Not the finale to Sectionals we expected

Yes, the Warblers did an amazing job. They were charming, with more pizzazz than we gave them credit for in the past. There was a second group that we won’t even bother mentioning because it was so boring I changed the channel. But the final act was New Directions, and they definitely made an impression with the judges.

Why, you ask? Was it the “Gangnam Style” performance? That was good, but no; it was because Marley fainted — and into a mighty awkward position, if you ask me. It was a bit dramatic from start to finish. Marley was dropping breadcrumbs all through the episode about how she wasn’t feeling well. She left a Tic Tac on the sink (apparently that’s her new food of choice) and tried to tell Jake that she hasn’t slept in days and that it’ll be all her fault if they don’t win. It didn’t flow very well, and it felt rushed, but her foreshadowing was accurate, as the episode ended with her abruptly ending her set. She was a cross between Jessie’s caffeine pill–induced breakdown on Saved By the Bell and Natalie Portman’s death in Black Swan. However dramatic, her condition is a serious issue, and it’s good they’re addressing it. In the previews for next week, it looks like Kitty may actually be crying. Did something more serious happen, or is it actual remorse?

Prior to the drama, Ryder (Blake Jenner) and Jake (Jacob Artist) spent plenty of time bonding over Ryder’s willingness to let Jake “have” Marley and Jake’s minimizing of his dancing ability to allow Ryder to have the limelight. In another sudden turn of events, Ryder came forward in order to calm Marley’s nerves and ensure a seeming victory for New Directions, asking Jake to take the lead since he is a natural (with ballet experience).

That’s enough drama to play out for another few episodes, right? We’re looking forward to seeing how Cassandra feels about Dean and Rachel’s renewed interest, discovering Marley’s condition after her fainting episode, finding out if Kitty has any remorse, seeing if Quinn and Santana will finish what they started, seeing whether Brittany and Sam (Chord Overstreet) will hook up (Who saw that coming?!), and finding out where everyone else fits into the puzzle!

For more Glee recaps, check these out: