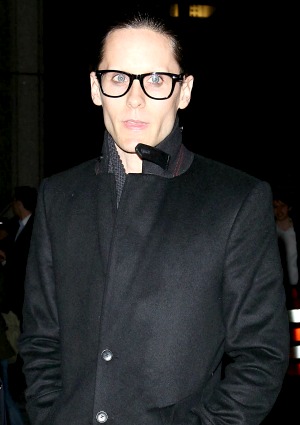 Photos of Jared Leto‘s weight loss are making fans do a double-take. Not only has the actor shed pounds for his role in the Dallas Buyers Club, he’s shaved his eyebrows!

Much like co-star Matthew McConaughey, Jared Leto is on an extreme diet to become emaciated for the filming of the true-life tale of Ron Woodroof. The 40-year-old singer and actor has signed on to play a transsexual woman with AIDS.

Along with the eyebrows, Jared Leto has been waxing his legs to help get into character.

“Your body goes through weird stages,” the 30 Seconds to Mars singer told Vulture of his weight-loss experience. “Sometimes it’s hard to hold on to water. But for me, it’s not about the most weight I can lose, it’s more to represent the character. I’m focused on what it means to be a transsexual woman.”

For fans watching the transformation, however, it is very much about Jared Leto’s weight loss! The actor, seen here on Nov. 26, hasn’t revealed how much weight he’s lost yet, but Matthew McConaughey is working on shedding a full 40 pounds from his normally svelte 183-pound frame.

Both men are doing their best to reassure fans who are unsettled by their scary-skinny new looks.

Matthew McConaughey told The Daily Beast, “Everything has shrunk quite a bit. … I don’t have the leverage I used to. I have body soreness. … [But] I’m as healthy as can be. My blood pressure, everything’s fine.”

Jared Leto tweeted to fans Thursday, “Thanks for all the concern.. energy a bit low but I’m doing OK over here! XO.”

Do you think Matthew McConaughey and Jared Leto are going too far for their roles?