If a young Hollywood actor wants to skyrocket to fame and become the object of every American female’s desires, he needs to do only one thing — star in a Nicholas Sparks movie. 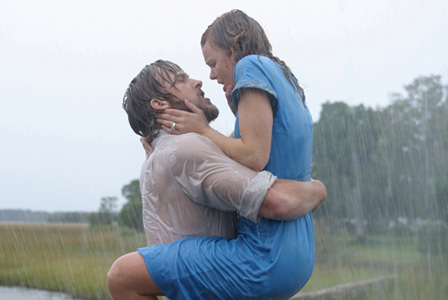 Do you honestly think women would be so wacky about Ryan Gosling if it weren’t for The Notebook? So why are we such suckers for Nicholas Sparks’ movies and books?

Every girl wants a take-your-breath-away answer to, “So how did you guys meet?” Saying you found your lover’s message in a bottle or that your Zac Efron look-alike fiance found you by matching a picture of a lighthouse to the town you live in sounds so much better than, “It was Saturday night at the club and coming up on 2 a.m., he bought me several drinks, we did the New Jersey Turnpike on the dance floor and I realized how funny he was.”

We’d have a better chance of figuring out how to live on Mars than experiencing most Nicholas Sparks scenarios, so why are we so enthralled with them? Is it about hope? Fantasy? Have implausibility and romance become completely synonymous? When WhatsYourPrice.com conducted a survey of 10,000 men and women regarding the connection to Nicholas Sparks-like storylines and hooking up, 24 percent of men reported that they have mimicked a scene in a chick flick to impress a girl. Yep. It would appear that the “being saved by a handsome prince” scenario that is so ingrained in all of us supersedes any and all reason, at least 24 percent of the time.

This same survey showed that severe weather systems make us want to get funk-ay. A whopping 95 percent of women surveyed said they had fantasized about kissing in the rain, and 57 percent of those women said they believed this fantasy exists because of a Nicholas Sparks movie or book. That’s giving Nicholas Sparks a lot of credit. Obviously 57 percent of the women have never seen a black and white movie — those people were always making out in the rain. The guys dig severe weather too — 64 percent of the men surveyed say they get a charge out of thunderstorms and 43 percent said they get turned on when the lights go out due to the weather. Is there more energy in the air during a storm? Is it the barometric pressure? Or has Nicholas Sparks placed a sexual Pavlovian response in our collective psyches that makes us want to stop what we are doing and throw down when it’s raining or thundering outside?

This survey sparks the imagination

OK, we’re done with the “sparks” puns. It’s time to get real. I went to see The Lucky One with my daughter for one reason — Zac Efron. He is one area where my tastes align with my 18-year-old daughter. Would I make out with Zac Efron in the rain? Uh, yeah. I’d also make out with him in a urine splattered bathroom in a New York City subway station (with my boyfriend’s permission, of course). I’m a Leo, so I’m a die-hard romantic but the storyline of this movie made me want to cringe in embarrassment at times. The Lucky One was dripping with so much cheese and honey I damn near choked. Of course I still enjoyed it (Zac Efron), but I think I speak for all women when I say if it’s raining outside, I want to be inside. If the lights go out, I’m worried about how I’m going to feed my family and keep the house warm — it doesn’t exactly spark any sexual desire (sorry). And when it’s cloudy out, I really just want to lie around in my sweats, making unladylike noises and stuffing my face with salty empty calories while I watch a Nicholas Sparks movie.