Taylor Swift has a crimson period: Nearly every recent performance by the star has featured a red dress and a bright-red microphone. We know another performer who likes to use a colored microphone. 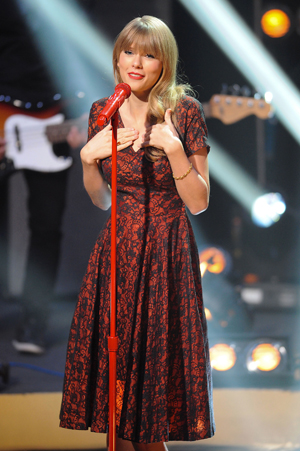 Taylor Swift doesn’t want the crowd to forget the name of her latest album: At all of her recent performances, she’s swathed in crimson and sings behind a bright scarlet microphone.

The microphone, red from top to bottom, is noticeable enough that on Taylor Swift’s official forum, fans are longing for it, and trading ideas on where to get their own model.

No one seems to know if the microphone is custom-made or not, but Taylor was seen performing with it on Good Morning America in Times Square in October, during the ARIA music awards in Sydney, on Scandinavian talk show Skavlan (pictured), and in other venues.

Swift also has been pulling out a bright-red guitar, which she plays while wearing crimson lipstick.

What’s the album name again? Oh, yeah! We forgot for one second.

This brings to mind the tale Kathy Griffin told about Barbra Streisand’s 2003 appearance on Oprah, when Streisand sang her song Smile using an ivory microphone, dressed all in ivory, because she was going through an ivory phase at the time.

At the end of the show, Griffin related in her televised stand-up special Kathy Griffin…Is Not Nicole Kidman, Oprah asked Streisand where on earth she got a white microphone in Chicago.

“I had them paint one of yours,” Streisand responded.

Some time later, Griffin herself appeared on Oprah’s show, and during a commercial break, asked the talk show host about Streisand’s appearance. Without missing a beat, Oprah squawked, “Do you know she painted my microphone white?”