The Hood makes a new lady friend when he hunts down an assassin who nearly killed his mother. He’s in for an unexpected surprise, however, when he learns she’s hiding a secret that may be just as dark as his. 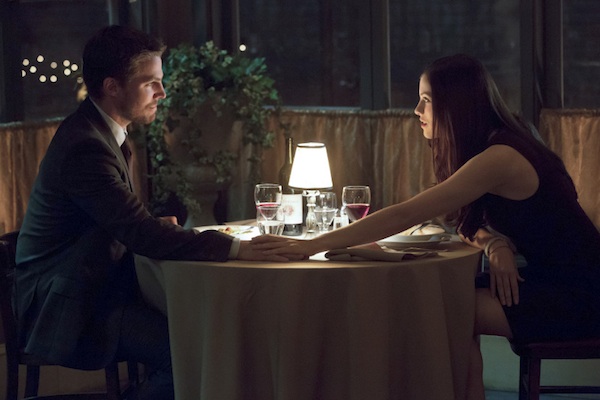 Lately, Oliver (Stephen Amell) has been trying to make a bigger effort to reconnect with his family, but his duel personalities are really getting in the way. Although we know his heart is in the right place, his mom and sister are struggling to see his good intentions.

Things get worse when Oli witnesses an assassin on a motorcycle shoot a man connected to the mob and nearly kill his mother. Instead, of staying by Mrs. Queen’s (Susanna Thompson) side and tending to her bleeding head (luckily, a few minor scratches were the worst of her wounds), he chases after the assailant on the bike.

The bad guy gets away despite Oliver’s nearly cheetah-like speed and he’s forced to return to the scene with the weak excuse that he was trying to get the license plate number. His sister Thea is suspicious, as always, about what Oliver is hiding. More important, she’s having a difficult time adjusting to the version of her brother who came back from the island. After a talk with mom, who admits “we all have secrets,” Thea encourages Oli to talk to someone about his own secrets before they destroy him. I don’t think the person he chooses to open up to is what either of them originally had in mind.

Focused on protecting his family and retaliating against the motorcycle assassin, Oliver visits a mob boss, Frank Bertinelli, who he thinks may be connected to the attack. He pretends he wants to set up a construction contract with the family in order to uncover details on the hit. During their meeting, he is introduced to the mobster’s beautiful daughter, Helena Bertinelli (Jessica De Gouw). When Mr. Bertinelli is called away to attend to other business, he insists Helena take Oliver to dinner to discuss details about the contract. 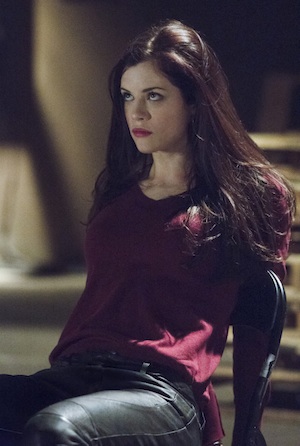 Over dinner, Helena and Oliver establish a surprising connection. Her fiance died and they find common ground in having gone through difficult times, which she refers to as “cruciblea,” that transforms you into a different person. For the first time, Oliver opens up and there’s even a spark in his eye when he talks to her.

The chemistry is so obvious that it’s easy to forget about Laurel (Katie Cassidy) and think this girl may be a better choice for him (and don’t feel sorry for Laurel. She’s finally giving Tommy a chance to date her!).

When Oliver finally gets a chance to turn into The Hood and fight the gangsters he thinks is responsible for the shooting, he runs into the motorcycle assassin and gets some surprising news. The shooter is actually Helena (a.k.a The comic book heroine The Huntress)! She knows her dad’s crew is somehow responsible for her fiance’s murder and has been targeting his men in revenge.

Later, Helena and Oliver are kidnapped by Mr. Bertinelli’s men and Helena finds out her suspicions were correct. Her father and his men are the ones who killed her fiance because they thought he was cooperating with the FBI. Now, the man who actually pulled the trigger, Nick, is right in front of her. Helena and Oliver are able to fight their way to freedom, but before they leave, she brutally breaks Nick’s neck.

That night, Oliver sneaks into Helena’s room and they lay their secrets on the table. He lectures her about her brand of justice being immoral (is he really one to talk?), but the argument quickly goes out the window when they realize how refreshing it is to tell someone their secret. And then they kiss. Passionately. And they seem like the perfect, dysfunctional, pair of sexy vigilantes.