Move over Elizabeth Taylor. Anna Nicole Smith is the next celebrity getting the Lifetime movie treatment. The model will be played by Private Practice star Agnes Bruckner. 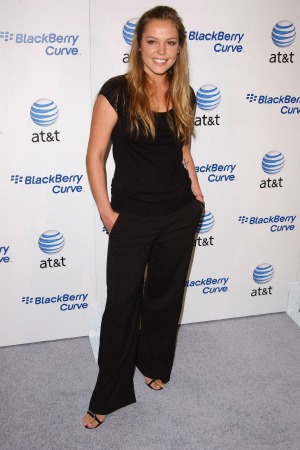 If you thought the Liz & Dick biopic on Lifetime was enough already with Lindsay Lohan‘s questionable portrayal of Elizabeth Taylor, get ready for another celebrity treatment from the same channel. Lifetime just completed production on the life of Anna Nicole Smith.

This time around, Private Practice star Agnes Bruckner will fill the role of the big-bosomed, curvy Southern model. Bruckner needed a little assistance to portray the role credibly, including lots of makeup, prosthetics, and the platinum-blonde hair Smith was so famous for.

The star also had to research Smith’s life to get down her mannerisms and accent. As Bruckner recently told Entertainment Tonight, “It’s such a fascinating story to me. There were so many different layers to her, and she was so iconic and so larger-than-life.”

There were a lot of challenging aspects to the GUESS model’s story since she suffered from a prescription drug addiction; she lost her beloved son, Danny, just after her daughter, Dannielynn, was born; and then she succumbed to a fatal drug overdose.

Bruckner revealed, “She had so many ups and downs. She was messy and crazy, and then she was really put-together at times.”

Joining her for the made-for-TV-movie is Adam Goldberg, who plays Smith’s trusted lawyer and boyfriend, Howard K. Stern. His role in her demise is a complicated one, involving years of court battles due to his enabling her prescription drug addiction.

Goldberg also told Entertainment Tonight, “I think it’s a very difficult role to play, because there is just so much tape on this woman that it [would be] very easy to just do an impression…. You have to find something in it that is honest for yourself, and I think that’s what Agnes is doing.”

As for Smith’s 6-year-old daughter with ex-boyfriend Larry Birkhead, she is making her own news this week. The little girl is following in mom’s footsteps by modeling for GUESS Kids’ spring 2013 campaign. Birkhead swears this is a one-time gig, but the blonde model is a natural in front of the camera.

The Anna Nicole Story will air on the Lifetime network in 2013.