For Hope Solo and Jerramy Stevens, the road to wedded bliss is turning out to be a bumpy one. The soccer star finally spoke out about her “happy” marriage, only for her husband to be locked up the next day. 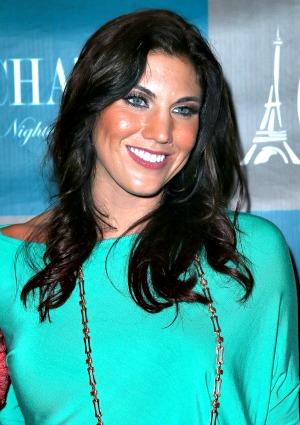 Hope Solo’s new husband, Jerramy Stevens, has been taken to jail for allegedly violating the terms of his parole.

Yet despite a string of apparent poor decisions leading up to his arrest just before their wedding, domestic violence charges being filed against him and now a trip to jail, it’s the press this soccer star is peeved at.

“My life is great. My life is happy,” Solo, who wed Stevens on Nov. 13, told Larry Brown Sports after a training session Tuesday before her husband’s latest arrest.

Appearing to reference the domestic violence charges filed against the former Seattle Seahawk player stemming from an incident Nov. 12 — the day before the pair exchanged vows — Hope Solo vented, “It’s unfortunate what the media can do to really judge before the facts are out there.”

Maybe sex should be an Olympic sport, too >>

Despite what was stated in police reports, Hope Solo insists she has no regrets about walking down the aisle and that violence isn’t an issue in their relationship.

“We never stand for domestic violence. I’ve never been hit in my life,” the 31-year-old went on to say. “It’s unfortunate, and that’s what the media can do.”

Jerramy Stevens’ latest trouble with the law occurred on Wednesday, Nov. 28, when he was taken into custody in Tampa, Florida, for purportedly violating his probation, E! News reports. The probation, in turn, stems from an October 2010 incident, in which cops found marijuana in his equipment bag while he was playing for the Tampa Bay Buccaneers.

Jerramy Stevens remains in a Florida jail, awaiting an appearance before a judge. Meanwhile, Hope Solo is in Oregon training with the U.S. National Team for an upcoming game against Ireland.

Is this a case of the honeymoon being over before it even began?