The stakes are getting high in Vegas. From past lovers to what really happened to Lamb’s wife, this week’s episode may be the best yet! 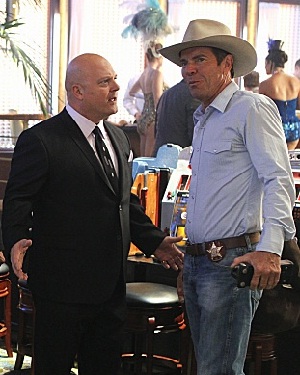 Vincent Savino (Michael Chiklis) is in some trouble. Eight years ago he spent time in Havana and had a steamy affair with the sexy and troubled singer Diane Desmond. Now she’s back in Vegas, and because of new boss Johnny Rizzo, she’s got a full-time gig at the Savoy. It’s too bad for Vincent that she didn’t leave her feelings for him back in Havana. Instead, she has no qualms about hitting on him right in front of his wife or dropping her clothes on the floor when they are alone. This won’t lead anywhere good.

Vincent really is in love with his wife Laura (Vinessa Shaw) and is doing everything he can to get rid of Diane, but that woman is stubborn. He does trip up, however, when he asks Diane for a favor to distract Rizzo for the night. Their conversation gets heated and Laura walks in just in time to catch the tension. She may play dumb, but she’s a smart woman and figures out quickly that Diane is his old mistress from Havana.

Now, Laura wants nothing more than to get rid of Diane and she’s already proven she’s a woman who gets what she wants. Since it’s Rizzo who’s controlling everything in the Savoy now, she knows Vincent can’t just fire Diane. So instead, she goes to our favorite ADA Katherine O’Connell (Carrie-Anne Moss) and agrees to start giving information on her husband’s associates. Johnny Rizzo better watch his back.

On the law-abiding side of Vegas, the Lamb brothers are on the case of a murdered airman and have to work with an Air Force lieutenant who isn’t exactly fond of Ralph Lamb’s (Dennis Quaid) investigation tactics. It isn’t until the lieutenant discovers Ralph’s past as a military police investigator that some mutual respect is established and the two are able to work together to make some headway in the case..

After talking to the victim’s girlfriend they were able to establish that the airman was preparing to propose in their “special spot” that evening (he obviously wasn’t very sneaky about it), but by 3 p.m. he had completely changed his plans. Not long after he was found murdered. So what happened in those four hours to set the victim so off course from his original plans? Ralph and the Lieutenant stop at nothing to find the answer, but they land in dangerous territory when they uncover a government conspiracy to cover up an outbreak of radiation poisoning. After being held at gunpoint by the corrupt government officials twice, Ralph is able to outsmart the men and get a confession.

Before the lieutenant leaves, he asks Ralph if everything has become an investigation since he’s taken on his sheriff’s role — does he find himself obsessing over every detail until he finds the answer? Ralph says not, but we know he’s lying. Later, over a glass of scotch, he looks at his deceased wife’s police report and discovers that there was suspicion of foul play in her car accident. Pity the fool who murdered Mrs. Lamb — Ralph will not rest until he finds him and serves up his famous and unique brand of justice.