Tonight, Arrow gets a visit from the Huntress. The comic book heroine sizes up the famous archer. They both have ulterior motives, but could their lies jump-start a genuine friendship? 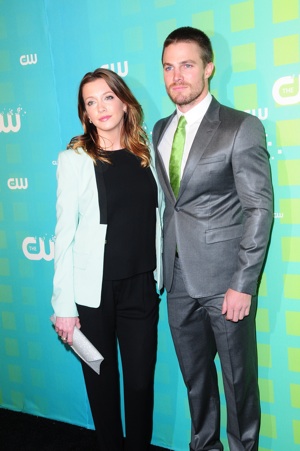 Both Helena and Oliver are more than what they seem. She appears to be a pampered princess, while he’s seen as a troubled playboy. Little does the world know how they spend their free time. Oliver fights crime as a hooded vigilante, while Helena tries to right her father’s wrongs. With so much in common, is there potential for a love connection?

As Arrow executive producer Andrew Kreisberg told TVLine, Helena doesn’t treat Oliver like everyone else. She doesn’t see him as damaged goods.

“She’s the only person who’s ever said to him, ‘Do you miss the island?’ For her, the thought of being alone on a deserted island actually holds some appeal. It’s her unique perspective on Oliver’s life experiences that make him look at her as a potential interest, because he doesn’t have to pretend to be the ‘Oliver Queen with the smile on his face,’ saying everything is fine. He can actually let her know that it’s not fine and that there are times when he misses the island because there was a clarity, a purpose there.”

But don’t expect these two to immediately hit it off. Kreisberg says, “There are going to be both team-ups and face-offs.”