Tyler Perry was hit with a $225,000 lawsuit Tuesday, from an author who says her book was the basis for the 2012 film Good Deeds. 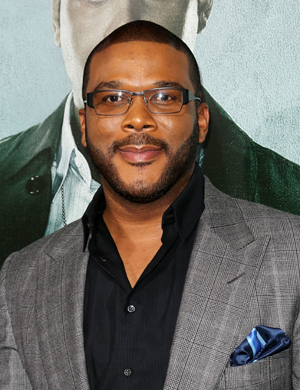 Tyler Perry is under fire from an author who says he stole her idea for his film, Good Deeds. She filed suit on Monday, asking for $225K in damages.

Terri Donald says she sent Perry a copy of her book, Bad Apples Can Be Good Fruit (written under the pseudonym TLO Red’ness), long before the film was made, and contends that the movie’s plot is suspiciously similar to her book.

Film and book do share similarities. In both, a man and a woman who have secrets in their past try to move forward with their lives and find a better future together.

Tyler Perry to Oprah: I was severely abused >>

However, Donald’s book takes the point of view of the struggling single mom, while Perry’s film focuses more on the male character, played by Perry himself as is his habit in his own films.

Perry’s camp has not responded publicly to the charges yet, and a judge will decide whether the suit has merit.

But on the face of it, the lawsuit seems more than a little ridiculous. Why? Because you can’t copy an idea. Donald does not own the idea of tense romantic entanglements, or of secrets from one’s past coming back to bite one in the present. Any soap opera writer could tell you that.

What you can copyright is the expression of your idea. If Perry stole dialogue or narration from Donald, he may be in some legal hot water. But if Donald’s suit rests solely on the fact that her book and his film share similar plots and characters, then the suit is baseless. There are a limited number of plots in the world, and they’re recycled ad nauseum.

Even if Perry was inspired by Donald’s book (and she’s going to have a hard time proving that), he made a film that’s different from her take. That’s not copyright infringement, that’s an artist being inspired by another artist.

However, it’s surprising that Perry doesn’t employ a cadre of folks to send back unsolicited books and manuscripts, as is standard practice at networks, studios and other organizations that create books, shows and films. Typically an unsolicited idea or script is sent back with a polite note explaining that the company can’t accept such things.

Makes sense, because most authors, particularly inexperienced ones, tend to think their ideas are wholly original. Magazines get letters all the time from authors who assume their ideas were stolen; usually they go into a crackpot file and never rise to the level of lawsuits.

Perry’s Good Deeds, however, made $35 million at the box office and so makes a more attractive target for suits.